Christian Weston Chandler's Adult Chronicles (stylized CWC Adult Chronicles) is a TRUE and HONEST fan-made episodic video game currently in development. Players take control of Chris and explore the detailed world of Chris-chan while learning more about our intrepid hero as they explore and overcome a myriad of obstacles. The game is free to download. Originally planned to have 4 parts, it was last updated in 2017 with only 2 parts. Development progress is slow, as the creator, Maple, works on it as a hobby in their spare time.

In 2007, the "original" character Sonichu and his creator Christian Weston Chandler's "unique" talents were discovered, giving rise to one of the most infamous users of the internet. At first Chris drew comic adventures and stories of Sonichu and friends aimed at children. He had grandiose plans of Sonichu games, books, toys, video games, card games, and much, much more. That all changed when Chris's own self-insert character within the Sonichu comics hijacked the spot of main character and instead had the comics revolve around himself and his struggles against Villainous Adulthood. Gone were the child-friendly stories, replaced with vulgar XXX content, violence, racism, and homophobia. Gone too, were any plans to create his Sonichu video games rather Chris turned his attention towards creating a game based completely about him called Christian Weston Chandler's Adult Chronicles.

(Un)fortunately, Chris never made any progress on the game beyond creating his own cover art, ad and posting a few tidbits here and there, leaving his "fans" to imagine what the game could've been. 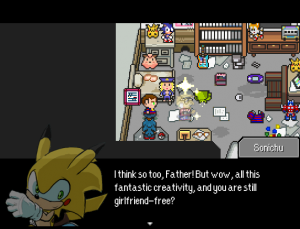 The intro to the fan-made CWC’s Adult Chronicles references Chris’s belief that his imaginary friends are real.

CWC Adult Chronicles features many elements that will be familiar to those who have experience with the 16/32 bit era of 2D role playing games. The visual style and battle mechanics are highly reminiscent of EarthBound and Mother 3, with some unique elements peppered throughout. The game features voice acting and highly detailed elements taken directly from Christian's life, such as his playtime in Animal Crossing. The main characters from Sonichu also appear in ghost form at the beginning, referencing Chris’s poor grasp on reality and his belief that he can interact with his characters. The opacity of the Sonichu characters changes according to his sanity level (which starts at 50%).

Players control our titular hero Christian Weston Chandler from a top-down view, and are able to traverse rooms and areas while interacting with objects and NPCs. Battle sequences change to stylized first-person view in which the player is able to attack, use items or special moves on the NPC they are facing.

Episode 1: The game begins in Christian's room and allows you to learn the game as you explore the Chandler homestead battling Kimmi and Bob Chandler in the process.

As the game begins the player finds themselves as Chris waking up in his room. As the player leaves the bed a quick scripted event begins with Sonichu appearing before Chris.

(Yawn) All my hard work has finally paid off, today I release my Sonichu comic onto the internet!

Well, Sonichu, I feel this comic is my best work yet!

I think so too, Father! But wow, all this fantastic creativity, and you are still girlfriend-free?

Eh, bothers me too. But I will never give up. I will find my sweetheart yet.