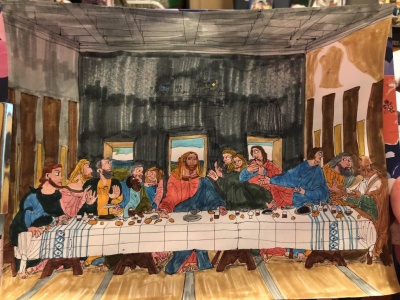 And as they were eating, he said, Verily I say unto you, that one of you shall betray me...

On 19 September 2021, Chris wrote an open letter from jail to an unknown individual while awaiting trial on a charge of incest. He asked the recipient to relay the contents to Null and to deliver the physical document to Chris's attorney, David Heilberg. Null uploaded the scanned letter to Kiwi Farms on 24 September.[1]

In the letter, Chris indicates that he has taken an interest in the Bible, likely provided to him as part of his jail accommodations. However, he also seems to be under the impression that he is Jesus of Nazareth reincarnated (despite Jesus being male while Chris presently identifies as a female) on top of his existing delusions about the Dimensional Merge, citing this revelation to an apparent similarity in appearance between Western depictions of Jesus and himself (ignoring, of course, that historians and religious scholars understand that Jesus had brown skin and did not have any Caucasian heritage).[2]

Though some expected Chris's extended time in the slammer to humble him, the end result seems to have had an opposite effect as he's retreated even further into his fantasies than before. We would try to explain what this means for the current state of Chris's mental health, but he does a much better job than we ever could.

Chris evidently never listened when he was given the right to remain silent. Before this point, while the prosecution had audio of him confessing to the act, information collected from internet forums or leaked text messages can be unreliable in court.[3] Chris's lawyer could have made the argument that he was coerced into saying those things (which has happened before), that his voice was edited or synthesized [4], that he was unaware of his own actions due to his mental disability, or even argued that Chris's accounts were taken over by trolls, as they often are.

With this open letter, however, Chris has crippled his own defense due to providing a confession of incest with his mother. He even confessed to stealing from Barb's accounts at one point, which he hadn't even been charged with yet. To add the cherry on top of it all, he's made it completely clear that not only was he fully aware of his actions and their consequences (meaning that an already-unlikely insanity plea is even less plausible now), but he still has no remorse for his actions, which increases the chances of a far harsher sentence. While it's too early to predict exactly what will happen next, it's safe to assume Chris has essentially handed the state prosecution their guilty verdict on a silver platter before the trial had even officially begun.