Difference between revisions of "All Star" 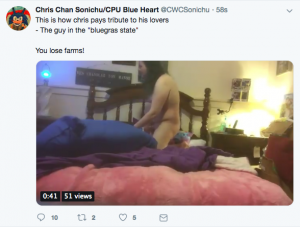 "Well, the years start coming and they don't stop coming."

"All Star" is a 1999 song by Smash Mouth. Widely known as the opening theme of the animated film Shrek, the song has since entered internet meme culture in the last decade thanks to Millennials and Zoomers. During the "Cryzel Torture" chat of 21 April 2018, Chris uploaded two covers of "All Star" to the Idea Guys via Discord.

Having gained Chris' consent to use his Discord account to aid in the conflict against the Idea Guys, Kiwi Farms owner Null leaked the SFW version on 13 July.[1] Later that year on 18 November 2018, a troll impersonating Magi-Chan, presumably one of the Teen Troon Squad, leaked the second, TRUE and HONEST rendition with Chris mass debating to Chris' Twitter. The tweet was deleted minutes later, but the video was quickly preserved by Christorians.[2] More parts of video would be leaked by Lukas Sampson, the ringleader of the Teen Troon Squad onto /cow/ on 31 December 2018.[3]

Notably, Chris sings in the same growling voice that he used to indicate he was singing under duress way back in It's UGH! (2009).

[Chris makes a constipated grunt and the camera briefly gains a green tint. He begins reading the lyrics from his phone in a similar constipated low growl, with heavy tone variation, and gesticulating wildly.] Some-BODY once told me,

the WORLD is gonna ROLL ME!

I ain't the sharpest [voice drops to croaking voice] torl in the sheeeed!

In the shape of an L, on her foreheeead!

And they don't starp comin'

Feh to the rules and they hit the ground runnin'

It dudn't make sense not to live for fun

So much to do, so much to see,

So what's wrong with takin' the backstre'

Hey know, you're an all star

Get your game on, go bleh

Get the show on, get beh

[Shakes his phone] And all that glitters is gooold

Judgin' by the hole in their satellite picture

[Picks up the tempo] W'er's ge'in warm so ya might as well swim!

My world's on fire, how 'bout yours?

That's the way I like it, I'll never get bore'

Hey now, you're an all star

Hey now, you're a rockstar

Get the show on, get beh

[Begins continuously shaking phone] An' all that gli'ers is gooold!

Hey now, you're an all star

Hey now, you're a rockstar

Get yer show on, get bleh

Spare some change for gas, I need to get away from

Self away from this place

I could use lotta fuel myself!

An' we could all use a little [Leaning towards the camera] chaaange!"

And they don't stop comin'

I feh to the rules an' I hit the ground ruh

Di'n' make sense not to live for fun

Yer brain gets smart but yer head gets dumb

So much to do, so much t'see

So what's wrong with takin' the backstre'

Ya never know if you don't go. [Lurches towards the camera] GUH-OOH!

Ya never knuh if ya don't [Lurches again, but less intensely] glow

Hey now, you're an ahrl star

Get the game on, go blay

Hey now, you're a wock star

Get the show on, get pay

An' all that gli'ers is goool'!

Only shootin' stars break the mol'?

An' all that gli'ers is gold

[Chris makes an extended constipated grunt, picks up the camera, spins around and punches it to the ground.]

The uncensored version can be found here, if you really need to see it.