Difference between revisions of "Aly Hirschberg" 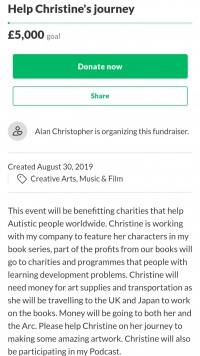 Hirschberg's fundraiser for Chris: the former thinks the money will bring him to London and Tokyo, while the latter has other designs for it.

Aly Hirschberg[2] (mostly known by her transgender byname Alan Christopher) is a Scot living in England and a professed believer in the Dimensional Merge, who has made it her life's mission to spread Chris's wonder throughout the known world. She first appeared in September 2019 as one of several weens on the sidelines encouraging Jacob Sockness's ill-fated journey to Chris's home, expressing love towards Sockness much as Sockness would to Chris. Aly goes above and beyond normal weenery, however, in that she wants to make Chris's life an international affair. She has encouraged both Chris and Sockness to visit her home country, and has set up fundraisers in vain for this purpose since August 2019,[3] regardless of the fact that Chris has never left the United States and has virtually no authentic experience with foreigners, and presumably has not got the passport he would need to make such a trip at any rate.

Though Chris has expressed interest in visiting Britain and Japan before,[4] this would not be what led Chris to notice her or advertise her £5,000 fundraiser. Instead, the two made direct contact for the first time when Chris re-tweeted the campaign on 6 October 2019, claiming the money was supposed to take care of his expenses for BABSCon. Curiously, Hischberg had created a separate fundraiser of £4,000 specifically for BABSCon, while the £5,000 campaign Chris provided on Twitter was the pre-existing one for this proposed world tour. Whether this was oversight or a deliberate grab for a thousand quid cannot be determined.