Difference between revisions of "Anna McLerran" 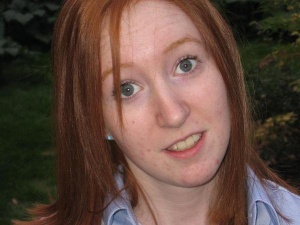 Anna McLerran (born 30 July 1985[1]) met Chris through her job at the Pac Sun in the Charlottesville Fashion Square. She and Chris are no longer in contact. Despite having been one of Chris's few real-life "friends", Anna is disliked by many for her attention whoring and inability to live up to her promises regarding information about Chris.

Chris was brought to Anna's attention when, during the Love Quest era, he started advertising himself in front of Pac Sun. This is what inspired her woeful short story The Tale Of The Crazy Pacer, published early in 2006.

After publishing the story she befriended Chris and he threw her a surprise birthday party (see below). Chris made romantic advances towards her until she told him she was a lesbian and a Mormon. His heart level was shattered once again.

Anna is indeed gay. Before coming out, she told Chris she was a lesbian in order to rebuff his advances,[2] but recently she has lamented having to come out of the closet to her Mormon family.[3] Chris occasionally refers to her as proof that he can be friends with homosexuals (for instance, in this December 2008 IRC chat).

After Christian discovered the aforementioned story on Encyclopedia Dramatica, Anna felt a need to defend Chris against the internet at large. In a textbook case of white knighting, she edited Chris's ED page. Anna added a new section to the article, in an attempt to paint Chris as a goofy clown, rather than a perverse psychotic.

This passage was so masturbatory, it was assumed that it was written by Christian himself and it was credited as such. However, in December 2009, Anna admitted to writing the article section herself.[5] It is unknown why she had actually befriended him; whether or not it was to quietly troll him and laugh at his stories, or if it was genuine. Many people lean towards the former as she appears to have a bit of a sadistic streak, but according to her, her intentions were pure.[6] While she is well known to defend her friends to the bitter end, Christian included, she has no problem mocking the mentally handicapped (who doesn't?), implying that autistic people should be embarrassed for being, well, autistic.

On the night of 5 December 2009, Anna complained about pampered socialite Nicole Ritchie having appropriated a classic picture of Christian in his mother's underwear to use against tiresome faux-punk guitarist Benji Madden. Anna, self-appointed guardian of Chris, kicked up a stink, demanding that the picture be taken down, as if it could not be found elsewhere. According to Anna, "he's autistic and does whatever the internet tells him to do :(",[8] ignoring the substantial amount of depravity that he exhibits without any outside encouragement. Anna went on to criticize the CWCki and other sources of the truth about Chris, claiming that "there is very little truth to anything those websites say about him. trust me on this one. he is an awesome guy in real life. super nice."[9] This is all very amusing when you consider her initial reaction to seeing the picture: "WHAT THE FUCK hahahahahhahahahaaha he's getting so famous!!"[10]

Anna announced plans to write a book encompassing the life and failure of Chris. As with many of her claims, this proved to be a load of bullshit.

Anna is a polarizing figure among trolls. Though she has displayed an openness and apparent willingness to help, she is accused by many PVCC and #sonichu regulars of being an "attention whore" who promises information on Chris but never delivers, or of providing details that are already widely known (notably about his name change). Her appearances on the PVCC usually tended to be vapid attention-seeking exercises full of retarded random-access humor rather than any useful personal insights into Chris.

On the other hand, she is highly regarded by some trolls (who clearly don't have much female interaction) who fawn over her many YouTube dancing videos.

Before Anna left for Utah, there was a birthday/going away party for her. Fortunately for trolls, it was documented and Chris is seen outside of his natural habitat, attempting to socialize with his peers.