Barack Hussein Obama (born 4 August 1961) was the 44th President of the United States of America. He was preceded by George W. Bush and was succeeded by Donald Trump on 20th January, 2017.

He appears briefly in Sonichu #8 in episode 17, painting the White House black. There was a popular joke where he did so after winning the presidential office. Chris obviously took this joke way too seriously, even believing it as an actual rumor about Obama.

Chris, while initially disliking Obama, felt he and Obama were much a lot alike, in that they were both discriminated against, essentially equating Kick the Autistic with actual racial discrimination. Chris admitted that after watching the A&E documentary on Obama and John McCain, he decided to vote for Obama because he felt he had more in common with him. In other words, Chris had no interest in or understanding of any of the campaign issues or the candidates' opinions on them.

Chris did a prearranged interview in the video Rollin' and Trollin' where he spoke about how he liked Obama and made no mention of painting the White House black.

On New Year's Eve 2009, Chris claimed to have "snail-mailed" Barack Obama asking to make homo ads on the CWCipedia illegal, with involvement from the FBI and jail sentences.[1] 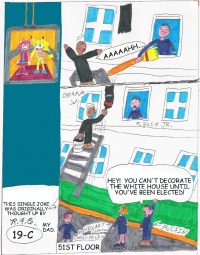 Chris's brilliant political satire in action. See, it's funny, because Bush is known to poke his political rivals with a broom.

This page was removed from CWC's site along with the comic pages featuring pornography; the pornographic pages were restored in the Luv Shack, but the Obama page remained removed.

While still a U.S. Senator, Obama made a cameo appearance in Sonichu #8, featured in one of the multitude of bizarre elevator gags seen as Sonichu and Rosechu ascend to the top of the 4-cent_garbage.com building. Inexplicably, the entire White House is contained on the 51st floor, where Obama is painting the exterior black. Below, Senator John McCain (R-AZ), who ran against Obama in the 2008 Presidential race, chides Obama for presuming to redecorate the White House before actually securing the election. Senator Hillary Clinton (D-NY), who would later become Obama's Secretary of State, and Sarah Palin, McCain's running mate and then-Governor of Alaska, also look on with annoyance.

From inside the White House, then-President George W. Bush notices Obama's audacious paintjob, and takes matters into his own hands. Using a broom, he tips over Obama's ladder. The implied extent of Obama's injuries from the fall is left up to the imagination of the reader.

Obama is wearing a kufi, which is a traditional west African hat associated with Muslims. This is probably the result of Chris seeing photos of Obama wearing a kufi that have been released.