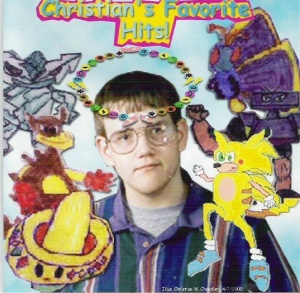 The first public appearance of Sonichu.

Christian's Favorite Hits! is the homemade CD which sparked the creation and debut of everybody's favorite Sonic recolor, Sonichu.

Tasked with creating a jewel-case insert for graphic design class at high school, Chris found himself once again fighting for artistic freedom of expression. The draconian rules of the assignment – that he avoid using copyrighted images – required Chris to get creative.

Chris claims to have gotten an A+ on the assignment.[2] The other characters on the cover are Christian's original Pokémon Espanolic, Koffingroo, Plautistic, Buggzap and Strongtire. Note that many of the other drawings on the cover are also uncreative combinations of Pokémon and other objects, such as the halo floating above Chris's head.

As for the CD's actual contents, the tracklist is unsurprisingly a very liberal interpretation of what constitutes a hit, being mostly comprised of songs from video game and movie soundtracks. 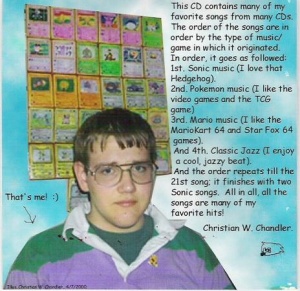 CD inlay. Note an early prototype of The Wall of Originals in the background. 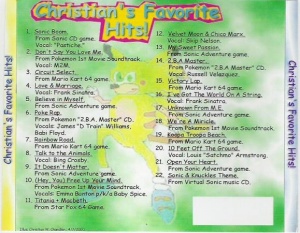 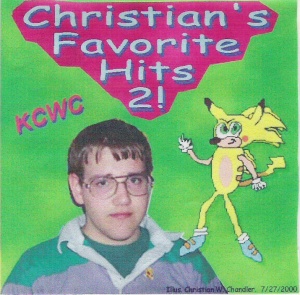 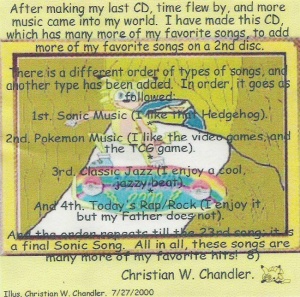 Chris made a second CD, and illustrated a cover for it on 27 July 2000. Even though the front cover is less nauseating than the first, the back cover is somehow even more of a mess compared to its predecessor.

The tracklist has never been publicly released, but it can be assumed that it's very similar in tone to the last one with the (presumed) addition of some post-grunge/rap rock songs.

As shown in the gallery below, Chris made a third edition of the CD at one point. Other than the cover, which was illustrated on 19 November 2000, nothing else is known about its contents.

Chris has produced numerous other homemade CDs beyond the Favorite Hits series as well. These CDs include: