Clyde Cash (alias Gregg Mays - that's Gregg with three G's) (4 July 1976[3]) is the leader of The Miscreants and is often considered to be Chris's arch-nemesis. Out of all of Chris's trolls, Clyde Cash remains quite possibly the most popular and notorious.

Ironically, despite Chris' constant demonizing of him, Clyde has warned him about several things that would later return to bite him in the ass, such as his unwillingness to work, spending habits, and poor treatment of women, and even predicted Chris' innate desire to dress like a woman. 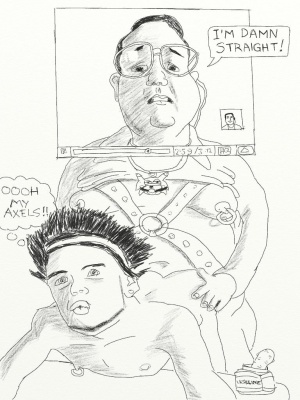 Clyde's butt being in trouble, courtesy of Chris.

For the longest time, Clyde had no problems with Chris. Although he disapproved of some of the content, he was pleased to see the joy the franchise had brought his brother Ryan. Every night before bed, Clyde would read Ryan the latest Sonichu adventure until Ryan had dozed off to sleep (usually within the first three pages).

This changed when Chris announced, in his usual knee-jerk fashion, that he was going to stop drawing Sonichu comics. Clyde tried comforting the upset Ryan to no avail. One night in mid-December 2008,[5] Clyde entered Ryan's bedroom, intending to share a tray of freshly baked gingerbread men, only to find the lifeless form of his brother swinging from a light fixture. The dark silhouette of his body threw ghostly shadows across the room.

On the desk Clyde found a note - apparently the pain of not knowing whether Crystal would be released from the Dark Mirror Hole was too much for the young Ryan to bear. Clyde screamed, but no sounds would come out. Collapsing to the floor, he swore undying revenge on Christian Weston Chandler. 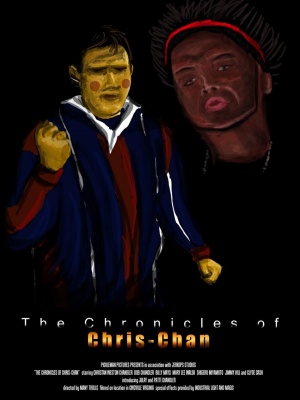 Artist's interpretation of this epic struggle. 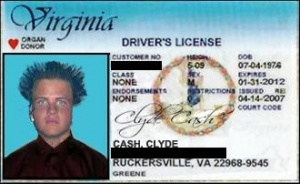 Virginia: No longer for virgins.

Clyde's first act was to rape Chris's sweetheart PandaHalo,[6] but it did absolutely nothing to Chris as he simply moved onto the next gal-pal. Chris believes that Clyde married Panda and had a "One Cent Daughter" named Penny.[7]

Then, Clyde posed as Gregg Mays (a web designer working for Nintendo) to gain access to Sonichu.net. Holding the site for ransom, he told Chris to make a video proclaiming he was gay. He then told him to make a video declaring his STRAIGHTness. Eventually, Chris regained access to the site. Striking again, Clyde worked with a troll and got rid of the domain. Chris, being resilient, bought Sonichu.info. With the help of PandaHalo, Clyde managed to gain access again.

It was around this time that Takashi Tezuka and Jay Z were doing their Animal Crossing game project. Clyde then decided to make things more interesting and posed as Shigeru Miyamoto to destroy any chance of the project. Teaming up with Reggie Fils-Aimé, they created the Miyamoto Saga.

Julie set up a Mumble chat in which Chris could communicate with TRUE and HONEST Sonichu fans. Clyde stalked Julie while infiltrating these chats to confront Chris. He began throwing demands to Chris such as cleaning his room. Chris at the same time also bought SonichuandRosechu.com. Clyde got access yet again, this time with the help of Julie. In the end, it was revealed that Julie was a thirteen-year-old boy and that Clyde had staged the whole thing.[8]

After that, he sent out his trusted Hebrew friend to scout out Chris's whereabouts. The MIPS turned Robert Simmons V into a troll and infiltrated Wesley Memorial United Methodist Church.[9] He then stole Chris's one and only date, Emily.[10]

When Ivy came along, he decided to continually harass her and despite Chris making a few threats, Ivy eventually gave in and rumors circulated about her killing herself.[11]

Oh, and Clyde also hacked into the PSN a few times, but then Jack Thaddeus did him one better...

And to think all this was done due to Chris not caring about one fan's tragic suicide.

On 22 May 2009, the death of Clyde Cash, by a shotgun wound to the head, was reported by The Miscreants. The incident was deemed suicide, although some suspected foul play. 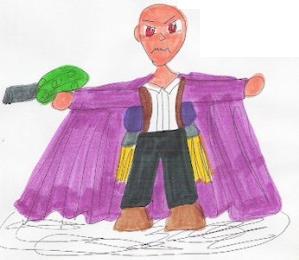 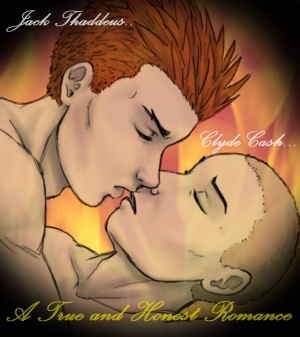 In the comic, Cly(de) is a villain working for Mary Lee Walsh. Apart from capturing Ivy and getting into a fight with Chris, he initially only appeared on CWC Music Video Holding Out For a Hero, officially Sonichu Special #1. Not much is known about Clyde, other than he lives in a mansion and owns a pickle gun and "slander ray."

He made his first appearance in the comic proper Sonichu #10 as the 4-cent_garbage.com building is collapsing. When Jason Kendrick Howell escapes, he condemns Clyde and Jack Thaddeus for being homo trolls. When Beel escapes, he too condemns the two for their actions, saying that being homo trolls that are "slandering and tarnishing an innocent man's good name" is just as evil as being an assistant for Adolf Hitler. With no option left, Clyde and Jack jump into the 66+6-story elevator shaft to their deaths.

Clyde Cash and his buddy Jack. 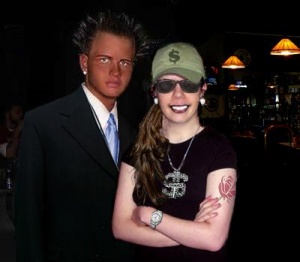 Clyde with The Wallflower. 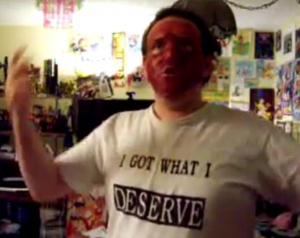 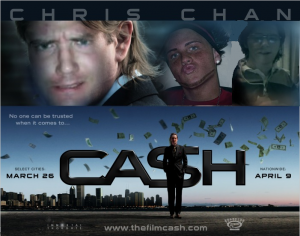 No one can be trusted when it comes to Cash! 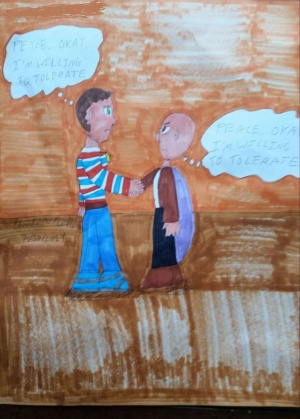 Chris had also a picture to blackmail Clyde, but ultimately nothing came of it other than a series of videos where Chris tries to torture Clyde.[12] Clyde scoffed at the final video.

However, because of the negative reaction to Sonichu Special #4, Chris, in the CWCipedia mailbag, made clear that he would only sit and talk cooperatively with Clyde to get him to stop harassing him.[13]

In 2014, Chris drew art of him and Clyde making peace as part of a commission. Notably, Chris completely screws up Clyde's height, making him look much shorter than he really is.