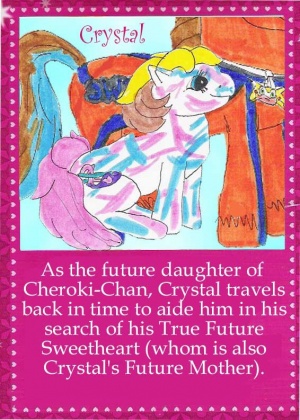 Crystal as a My Little Pony character 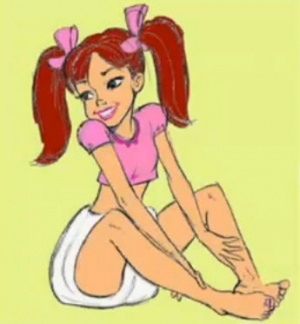 Around the age of 21, Chris had multiple dreams in which God and Jesus told him to find a sweetheart to build from the ground-up to have his daughter Crystal, named "after the illustrious metal",[2] according to him. In a custom My Little Pony trading card, Chris depicts Crystal as a pony who traveled back in time to help her father - Chris - find a boyfriend-free girl. This is completely ripped off from Chibiusa's entire premise in Sailor Moon, and also Baby's premise from the Super Monkey Ball games, although whether Chris knows about ripping this off as well remains to be seen.

Finding a woman who would birth Crystal has been a fairly consistent justification for Chris's Love Quest. At times he has seemed to be more honest in wanting a girlfriend so he can get laid or prove he's straight. For example, when Julie expressed a desire to have a child, possibly with Chris, he was ambivalent, and seemed more interested in a threesome between Panda, Julie and himself.[3] Yet with new heartthrob Ivy, his fantasy of making a family was strong, and Chris was upset when Ivy said she didn't like the name Crystal, and demanded a say in their daughter's name.[4]

Likewise, in a dialogue with potential sweetheart Kacey's dad, Chris revealed that he had a "prophetic" dream about Crystal when he was between the ages of seven and nine. He reiterated this later in the conversation, saying he was "definitely in elementary school," when he dreamed about giving birth to a daughter (in the dream he had an office job, which also won't happen). "Give birth" slipped out, as in Chris would like to gestate a human female infant within his body (or perhaps in a box) and somehow deliver her into the world. While it's most likely that Chris just fucked up while talking due to stress and autism, this could also be a Freudian slip suggesting that Chris has some gender identity issues, which typically begin in childhood. It's also somewhat possible that he doesn't know that the mother is the only one who gives birth, seeing how he uses it in other contexts.

After Kacey, Jackie was next in line as the vessel for which Chris' gift from God was to be bestowed. Crystal was featured in Lego form in the PlayingHouse video. Despite only being in preschool, she's advanced enough to keep a diary and look after her baby brother Reginald.

None. Prior to the Tomgirl Saga, Chris's chances were extremely slim, but not impossible - it was at least possible for him to impregnate a woman, however unlikely that would have been owing to obesity's effect on fertility and rather more pressingly actually finding a willing female. However, with HRT in session Chris is destroying what fertility he once possessed, rendering the odds of actually conceiving a child 0%.

He's even gone as far as asking a friend to be the vessel which will allow Crystal to enter our world, but as addressed, he is no longer producing potent sperm.

Her name is identical to that of Chris's sister from the comics, leading to some confusion.

It is unclear which spelling he was projecting for his future daughter (although he used "Crystal" in a Facebook message[5] and the infamous "Story of My Current Days"[6]). In the comics he spells his stupid fake sister's name "Crystal" consistently, although somebody called "Crystle" appears in the Mario Kart 64 Lego Raceway.