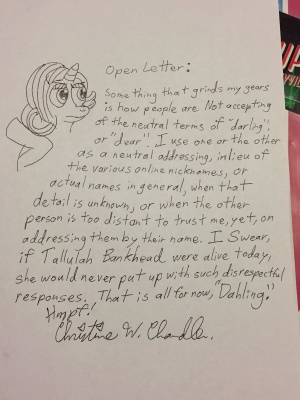 "Darling" first appeared during Chris's edit war against Encyclopedia Dramatica. On 19 January 2008, Chris blanked his page, displaying what he intended to be a letter written by then-president George W. Bush ordering Encyclopedia Dramatica to remove their message. Therein, he uses the term "dahling" twice, first to address ED, and again to refer to himself as a "dahling US citizen." [1]

Many years later, the term would be resurrected as Chris's default form of address for DoopieDoOver, which most trolls and later Doopie herself recognized as Chris attempting to hit on a potential Sweetheart. Chris's incessant use of the term was a key factor in making Doopie feel uncomfortable with interacting with him and setting the stage for the climax of the Doopie Saga.