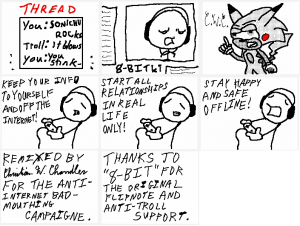 You can tell when Chris makes an addition, because suddenly everything sucks.

Don'tGetTrolled is Chris's 2nd Flipnote animation, posted to Flipnote Hatena on 22 June 2010. Chris is known for his plagiarism, but this is by far the most blatant and obvious theft he's ever undertaken. Viewers will immediately notice the very high animation quality compared to his other pieces. This is because he didn't make them.

The Flipnote is a barely remixed version of an animation Chris commented on extensively. Chris adds very little to the original animation, scrawling a message about internet safety on some of the frames, and replacing a picture of Sonic the Hedgehog with one of Sonichu. His description for the animation begs viewers to show their support for the "Bill for Anti Online Bad-Mouthing", a law Chris dreamed up that would stand in defiance of freedom of speech.

Chris actually credits the original creator, 8-Bit, for creating the animation, which is surprising considering how much he usually plagiarizes. Granted, Chris gives this credit in the worst way possible, acting as though 8-Bit is some sort of stalwart ally that supports Chris in his battle against the Bill of Rights. The comments on 8-Bit's page before Hatena shut down showed that Chris made no effort to contact him after his initial rant. It's likely that Chris thought of him as an ally. When informed by trolls that Chris stole his work, 8-Bit, being a good sport (and therefore the total opposite of Chris), simply posted on the remixed flipnote that he meant for others to modify it to their own tastes.

On top of all of that, Chris completely missed the point of the original video, as it is with everything else he watches. The original message was that if you reply to a troll, then it's your own fault for being a naïve slow-in-the-mind. It's all about personal responsibility for your own actions, which is an alien concept to Chris. Also notable is the fact that Chris locked editing on this video; much like how he begged people not to change his LittleBigPlanet levels, he is just as protective of his Flipnotes. Even when they are almost completely devoid of original material.

It does, however, show a few things about Chris and his thoughts. He still classifies ED as 4-cent Garbage, believes trolls are always on the lookout to find and post more videos of himself (which is true, and it doesn't help that he gladly delivers), and feels that all personal information should be kept off the Internet and all relationships should be started in real life (which is a bit of misinformation on his part - your information is gonna be on the Internet one way or another and not everything must be initiated in real life as he thinks).

The Flipnote was later taken down due to Chris sharing his real name, something against Flipnote Hatena's rules. It was re-uploaded on July 24 after a ban evasion.

The audio, and the majority of the video in this animation was not created by Chris. This being the case, this transcript will only cover the additions Chris made.

0:08-0:09
The original text "Don't reply 2 this this guy" is replaced with "Don't reply 2 any of these idiots". Chris also adds a variation of the "Awesome!" smile, and a hieroglyphic that reads "4-cent garbage".

0:14-0:15
In a graphic representing a forum thread, The word "pkmn" is replaced with the word "Sonichu".

0:16-0:18
In the background, behind the singing man, Chris drew a troll looking through a video camera. Moments later, this is replaced with a frame in the foreground, depicting the singing stickman as though he's in a newspaper article. "8-BITki" is written in the bottom right, as though it's a sort of headline. It's obvious it's supposed to be the Main Page of this very wiki, but Chris even fails at that.

0:21-0:22
What was originally Sonic the Hedgehog is replaced by Sonichu. Chris drew his initials in the margin, because Sonichu is an ORIGINAL CHARACTER DO NOT STEAL.

0:23-0:26
Chris wrote several short, ironic messages in the background, one appearing after another. "Keep your info to yourself and off the internet!" "Start all relationships in real life only!" "Stay safe and happy offline!"

0:34-0:35
After the animation proper ends, A two part message from Chris appears. "Remixed by Christian W. Chandler, for the Anti-Internet bad-mouthing campaigne [sic]." "Thanks to '8-Bit' for the original flipnote and anti-troll support."