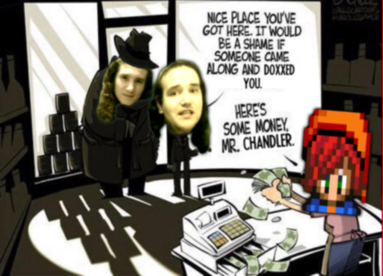 Doxing Jeff/Francine is a video uploaded by Chris on 17 November 2015, in which he calls out and belittles a trans woman named Francine for distributing unofficial Sonichu merchandise. The hypocrisy of transphobic comments is, naturally, lost to Chris.

In this video, Chris also mentions the Christian Weston Chandler's Adult Chronicles fangame and says it was created by Jeff/Francine Ouzuo, leading people to believe that Jeff/Francine Ouzuo was actually CWCki Forums user Maple, who is the true creator of the fangame. All the current information suggests that Maple has nothing to do with Jeff/Francine and that Chris's new "manager"/troll probably told Chris this information.

Yet again, another aspect of Chris's old self emerges--his stalwart brand loyalty and refusal to accept the idea of someone else using his uncopyrightable character. It's as if a fragment of the Jimmy Hill Saga has reappeared in the present day.

Chris has applied image stabilization to this video, despite the fact the camera is entirely stationary throughout. 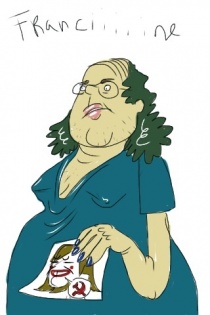 Hello my loyal fans! I got a selfie remote, so that works for the better. Anyway, I'm here tonight because obviously for years, since I started, uh, with the trolls and whatnot, there have been instances of fakers and false products that I had no approval of, or have participated in whatsoever, and now this has come to my attention, such as which is somebody made a fan version of my "Adult Chronicles" titled video game, of which I've made the, uh, fake title sort of. But anyway, uh, this uh, "Jeff Ouzo" or as she prefers to be called, "Franciiine," from the s-, state of Washington. She did not feel safe in Pittsburgh, and she's not transitioning very well either, sh-, so she claimed to be a les-, a trans woman. Mm. Anyway, she's uh, been preten-, she has pretended to be me on uh, a website or two, so...

And apparently, between that and her own bunch of, bunches of panhandling and whatnot, I would s-, I hav-, it has come to my attention that this person makes a lot of money, especially off of the quote-unquote "Sonichu merchandise" that she has pretended to be me and selling with, so here's the deal Francine: you cut me in on at, on about half of that, half of what you have made, from my name, and my imagery, and whatnot, or otherwise shut, shush on my store down. Shut it down. Because I have all the details abo-, about you, pretty lady-man. Mm? [blows raspberry]

Right, so, cut me in on all those profits, the half of that at least, 'cause you ain't getting away with the false merchandising anymore. At least I would not be sending any people asking for directions your way either. So you're safe from that. But everybody should know to come to me on my shop on Etsy and any other shops that I personally list and reference between my Facebook page, as well as my Twitter feed, and definitely on my Etsy storefront. Additional branches may come out very soon, still depending, I'm still learning. Thank you all very much, and have a good pleasant day.