Difference between revisions of "Financhu Crisis" 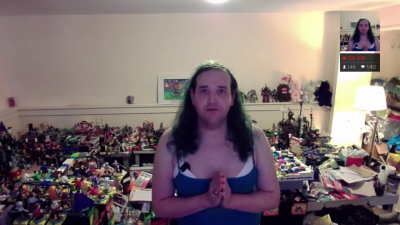 Chris's online activity for much of 2016

In June 2017, Chris began to take his Patreon account more seriously and recommenced drawing Sonichu comic pages. He has gotten several hundred dollars per month for his efforts, and continues to get as much to this day. As a result, begging had temporarily subsided. In mid-2018, however, begging resumed, for the stated purposes of avoiding foreclosure on 14 Branchland Court and buying enough food for his family. Meanwhile, Chris has been and continues to be sued for debts by several collecting agencies. Given that Barb is elderly on a fixed income, and Chris is lazy on a fixed income, one can only bleakly speculate what will happen when Chris is eventually left to fend for himself once Barb passes away.

As of 2019, Chris has mostly turned a blind eye to the Financhu Crisis because of the Dimensional Merge. Believing that he has vast wealth stored away in CWCville that should soon become available to him, his begging has again become relatively infrequent. 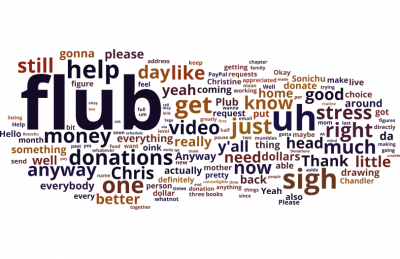 Chris has made some efforts to generate income for the household over the past few years (bar that of actually finding a job), which included opening an Etsy shop in 2015. However, any profits gained would immediately go straight to toy purchases, an irresponsible move that would to turn out to be a recurring problem that keeps the Chandlers in the red. The shop would eventually shut down from Chris lazily not fulfilling Etsy orders, but he would still find some revenue by the occasional eBay sales of select merch from the hoard. To further compound the issue, Chris has been instilled with a very real belief that fans are willing to drop large sums of money into his bank account for nothing, an expectation that has since been strengthened by the $1,000 donation by DStecks in September 2015. This belief would take on the form of the many begging videos that highlight the saga to this day. 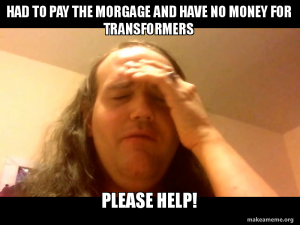 Despite actively begging for money since 2016, Chris has not attempted to get a job (then again, the last job he's had dates all the way back to 2003). One of his IRL friends, a woman from his Pokémon club named Alexa P., became concerned after seeing Chris repeatedly beg on Facebook. She suggested, in November 2016,[17] and again in April 2017,[1] that he contact one of her family members who works at Virginia DARS, a government service that helps disabled individuals find work. At the first suggestion, Chris didn't follow through, and at the second, he fired off a rant about why he was unwilling to get a job, and Alexa then gave up trying to help him.

Months later, in October 2017, Chris reiterated his excuse of helping Barb and the pets, and added another:[18]

In May 2018, despite being in desperate need of money after losing $6,000 and risking losing his home at 14 Branchland Court, Chris was still unwilling to work and served up another excuse:[19]

In June 2019, he added yet another excuse, his most pathetic yet:

Most of his claimed reasons hold no weight. A "background check", as explained by Jackie and Kim Wilson many times, only applies to legal records, and Chris's misdemeanors would not prevent him from getting a job. Fellow lolcows like William Elliott Waterman and Kenneth Englehardt also have their names linked to their internet shenanigans, yet they have gained employment. Also, discrimination on the basis of gender is illegal; Charlottesville is a fairly liberal city, so his trans identity should not be an issue. All in all, getting a job would probably reduce his stress over needing to beg in order to afford more toys. His excuses on being fearful of making mistakes and his obsession over his imaginary friends are blocks set down by his own mind – revealing that, rather than growing up and assuming responsibility for his future, he would rather remain a manchild forever.

Chris's only valid point is regarding people who are so intent on trying to troll that they'll contact a business just to harass management about him with made-up stories – as happened when he patronized The End Games and Anytime Fitness. 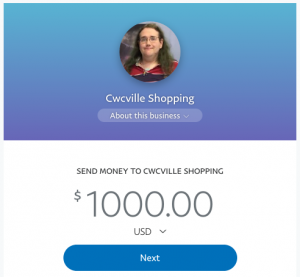 What Cole would have seen if he had clicked on the Paypal.me link Chris tweeted to him while begging this month. 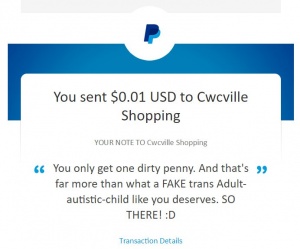 What Cole would have really paid. 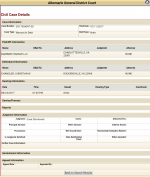 Although Barb currently claims $900 of Chris's tugboat each month to pay the active mortgage on 14 Branchland Court, the seriousness of the Financhu Crisis combined with Chris’s impulse spending have led many followers of Chris to speculate on whether the passing of Barb will lead to the so-called 'Homeless Saga'.[91][92] Chris’s future revenue, other than the monthly tugboat and fans' support, is likely to be very limited, with some of his followers admitting that Chris will never get any kind of loan or credit.[93] Even if Chris were to reverse his stance and try to get a job, nearly all potential employers would be unwilling to take on someone with little to no skills, and over a decade of real-life and internet notoriety.[94]

Both the state of Virginia and the US federal government have programmes intended to help the disabled secure independent living,[95][96] most famously Section 8 housing; a number of followers have suggested that Chris should sign up for it,[97] though these involve lengthy application processes and possibly several months' wait. On the contrary, a 'Homeless Saga' may be a wet dream for A-Loggers and weens, but it would be devastating for both Chris and many of his followers. The 2014 house fire caused a number of followers to doubt whether Chris will be able to cope with sleeping rough with little more than his clothes and medallion, especially after being pampered with toys and video games for many years.[98] Homelessness would also threaten the steady supply of fresh drama that continues to attract new fans and followers and leave them wondering: "What is Chris going to do next?"