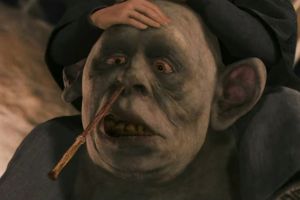 If only Chris had bothered to read it, he would have known how to deal with trolls.

Harry Potter is the protagonist of the popular eponymous fantasy book series written by J. K. Rowling from 1997 to 2007, about a boy with magical powers who attends a secret academy that teaches witchcraft. Despite (or perhaps because of) being a massive phenomenon that rivaled even Pokémon and Sonic the Hedgehog, Chris never got into the series. As a result, it is one of the few mainstream works that never got bastardized in Sonichu. It is also notable that Chris hates the series with an illogical passion.

As with his hatred of the HEXBox and Sonic Boom, Chris's hatred of Harry Potter is highly irrational and based primarily on a warped version of brand loyalty. Chris's hatred of Harry Potter grew out of the incorrect assumption that the books had destroyed the Pokémon fad.[1][2] This is highly bizarre, as anyone who was a kid in the late 1990s knows that the mortal enemy of Pokémon was Digimon (which Chris didn't mind).[3][4] One can safely assume that Chris, being highly ignorant of the literary world beyond Goosebumps, did not even become aware of the series' existence until the first movie The Philosopher's Stone (The Sorcerer's Stone in the United States) was released in 2001.

Another possible explanation for Chris's hatred of the series could be religious doctrine; many Christians have opposed the series since its release for encouraging an interest in witchcraft and the occult. However, given Chris's signature move, this is highly unlikely.

As per his grip on reality, he has personally referred to Harry as a "total Spaz",[5] at one point even threatening to kill him.[6]