I Got A Fish

From CWCki
Revision as of 13:10, 30 January 2022 by Paigeee (talk | contribs) (Changed some wording once again. (I'm so sorry for editing it this much))
(diff) ← Older revision | Latest revision (diff) | Newer revision → (diff)
Jump to navigation Jump to search

I Got A Fish is a video uploaded by Chris to YouTube on 27 April 2009. In this video, Chris jog-dances in place while a stupid song full of random-access humor that he made up plays in the background. The song is about his apparent possession of a wish-granting fish; despite this claim, he does not actually have one. It should be noted that Chris did voiceover over the footage, something he didn't do often. It's also probably the closest that Chris has ever come to carrying an actual tune.

The video is one of the few cases where the mainstream media got in on it.

The audio file included with the Power series of videos is a modified version of this song, but with the word "fish" replaced with "dick."

Chris reprised the song in Twelve New and Old Things of Christmas (2015), and again on New Year's Day 2020, where he included it in his first tweet of the decade.[1] 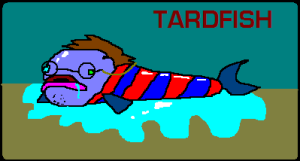 A true sturgeon with rage.

I got a fiiiiiiiiish! [spreads arms wide to accompany wobbly falsetto]
Would ya like to make a wish? [swings arm around and turns off camera with grace]