Difference between revisions of "Ivy" 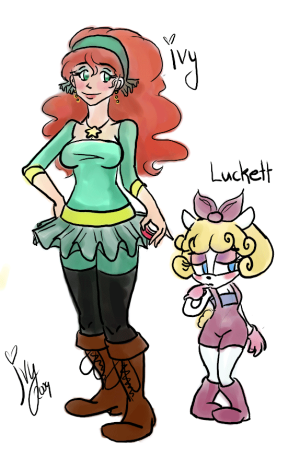 Something about Ivy brought out the crazy in Chris at levels rarely seen before or since. The Ivy Saga resulted in three Sonichu Specials, four music videos, a bunch of weird and creepy non-music videos (including the notorious orange soda video), a long awaited tour of his house, a new Christian and the Hedgehog Boys album, procuring The Lost Video, the emergence of Joshua Martinez and Rocky Shoemaker as troll obstacles, images of the new Medallion of Fail while he's wearing butt garments, and unexpected changes in Chris's behavior.

Ivy is a redhead. Chris lowered his standards slightly by allowing her to become a sweetheart (previously, women with red hair were excluded along with blacks and non-boyfriend-free girls). 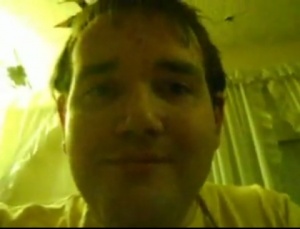 In his Captain's Log of 18 March, Chris gave a shout out to "Ahmy-vie" and her friend Rachel. This was right at the height of the Emily fiasco—between the day Chris stood her up and the day the Man in the Pickle Suit stole her away—so "Ivy" and "Rachel" were assumed by many observers to be code names for Emily and her friend Stephanie. Not even the most hardened of trolls could be ready for the creepiness unleashed two days later on the heels of the Emily date.

Ivy was in the driver's seat now, and proved to be a muse like no other. Chris responded with some of his most complex work to date, Sonichu Special 1 and its accompanying music video, CWC Holding Out For A Hero.

For the rest of March, Chris was a prolific video blogger. Even while pressed on another front by his arch-nemesis, Chris managed to make time to double down on his creepy video messages and make a positive difference in the life of Ivy's insecure cousin, Flora.

Things were moving quickly, but of course a classy college girl like Ivy wasn't going to arrange a sleepover at the Chandlers' sight unseen. Her next request—a tour of the property—ignited a slow-forming, but ultimately epic shit storm.

As April dawned, Rocky Shoemaker very nearly pulled the Chandlers, kicking and screaming, out of their vortex of stupidity. Luckily for her, Ivy had already passed all of the Chandlers' tests for TRUTH and HONESTY[4], and so was spared most of the (brief) fallout. But even as one crisis passed another emerged, when a mutual friend introduced Chris to Vanessa Hudgens. Juggling two needy imaginary girlfriends would once again prove challenging for one merely-mortal autistic boy.

With inspiration from Ivy, Chris got a new cwcville.com up, and made progress on Sonichu #9. The world's first-ever YouTube videos intended for crabs were made. The Hedgehog Boys got back together and hit the road again. And then shit got real: mid-month, Ivy found out about Chris's two-timing ways. The punishment was revolting, to say the least. After his humiliating penance, Chris was given a second chance...

...a honeymoon! The leaking of the infamous Giant Penis Comic, however, would mean April ended on a decidedly low note. Chris had to make an explanation video to ease the mind of a traumatized Ching Chong, and had to confess to all of his crimes; of course, the dastardly trolls pounced on every word.

Throughout the Chandlers' trials and tribulations, one gal-pal had remained TRUE and HONEST. A Chandler family vacation up to Boston, to visit Ivy[6][7], was in the works. But meddlers gonna meddle: in a fit of righteousness, Rocky brought the Chandlers to the police to sort out the trolls once and for all. Despite their protests, Ivy was on the same list as Clyde Cash and the other villains.

And despite their protests, Ivy blamed Chris for betraying her. 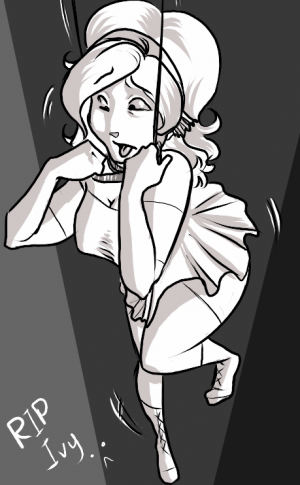 "Ivy" committed suicide by hanging in July 2009 "from being restricted from Communication, as well as coming to visit me" according to Chris. He tastelessly uploaded CWC "Boyfriend" as a belated memorial.

In November 2009, he described Ivy's death in a giant wall of text in the comic. During the PVCC's assault on CWCville, she was apparently trapped in a collapsing elevator, got the cables tangled around her neck, and was strangled to death despite BILLY MAYS's best efforts to save her. The page laying all of this out carries a brief dedication: "In memory of Sonichu-Girl, **Ivy O'Niel**".

In a May 2011 email, Chris dismissively mentions her, saying "that elevator gag was ONLY for comic story; she in reality committed suicide over me."[10]