Jacob Sockness is a 38-year-old Chris fanatic from San Francisco, California, who emerged in mid-2018. Like Chris, he is autistic,[2] receives a monthly tugboat, believes he is a god,[3] thinks he has magic powers and has built an elaborate fantasy universe with over a dozen instalments which he believes really exists.[4] From his habit of showering praise on Chris that would make Kengle blush, it appeared that, like him, Sockness was another autistic white knight; even so, he stood out by expressing his love and sexual attraction towards him. His more recent behaviour has indicated more malicious intent behind his actions. Even so, unlike many previous imitators of the Idea Guys pretending to belong to Chris's abortive personality cult, Jacob appears to be the first TRUE and HONEST believer in Sonichu and the Dimensional Merge after Chris.

Sockness occasionally comments on Chris's tweets to court him or to support his delusions. However, most of his activities are based on his Twitter page, where he would make frequent more graphic messages on how his love for Chris, even inviting Chris to visit him. He is also known to spread his message to other forums, most notably Reddit and Kiwi Farms. Occasionally, he would make videos dedicated to Chris in his YouTube account. Jacob has also appropriated Sonichu characters in his self-made pantheon of pagan, extraterrestrial spirits. In mid-2019, he gained Chris's favor as the two agreed to work together in working around Chris's June 2019 ban from eBay, and achieved considerable influence over Chris's own fantasy world, as seen in Sonichu 14. The two have also expressed interest in meeting in person, to onlookers' alarm. Little has become of these plans since, as neither has adequate funding or willpower to overcome the geographic and other barriers to any business or sundry affairs. 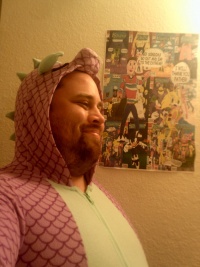 Jacob was discovered by pure chance by Kiwi Farms user neural while observing the many users around Chris's Twitter posts. After further digging, it was revealed that he also created a Kiwi Farms account under the name Jacob JS. It was in his profile page where he accidentally doxxed himself by posting links to his Facebook page and Tumblr blogs that reveals his personal information. Like his polar opposite Michael Hirtes, he is also a furry and lives in Section 8 housing with a tugboat. However, unlike Chris and Hirtes, Jacob is a dedicated Pmurt supporter, and adheres to some far-right views. Unlike the Idea Guys, who would fill Chris's mind with such themes just for their own amusement, Jacob seems to be genuine. Sockness also controls several sockpuppets to white-knight himself and converse with, who he claims they are different people.

While it is true that some of Chris's most diehard white knights are exposed as trolls, Jacob initally showed no hatred or amusement from Chris's activities. Rather, he displayed legitimate sense of love towards him. Evidence suggest that besides finding a kindred spirit in a supernatural believer, he is also sexually attracted to transgender people. Ironically, despite Sockness's desire to father a child with Chris, he is unaware that Chris is already in a polygamist marriage and ended his Love Quest. 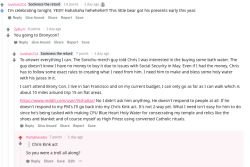 Despite declaring his love to Chris, some evidence suggests that his feelings are not True and Honest. In his Reddit account, Jacob had lurked around subreddits for incels, flirting with them. In his Twitter page, besides tweeting about arcane rituals and complaining about liberals, Jacob expresses his close love between a "sugar daddy", suggesting he is in a gay relationship with an older, wealthier man. Jacob has been known to flip-flop in his opinion on Chris ranging from sexual love to outright cursing him. It is unclear whether he is doing this for attention, genuine attraction to Chris, or both. When Chris allowed Jacob access to his Twitter account on 11 July 2019, he boasted about it on Reddit and even claimed that his 'Chris Kink' was an act. When asked to elaborate on what exactly Chris Kink and the others were, Sockness claimed in a conversation with CWCki editor Duff101 that the characters were original characters, like those created by Chris.

After establishing direct communication with Chris, on 14 July, Sockness tweeted that he would open a vendor account on eBay for Chris, acting as warehouse, clearing-house and middleman. Chris responded with gratitude.[7] The next day, Chris re-tweeted a GoFundMe campaign by Sockness to raise $300, nominally as a shipping fund[8]. 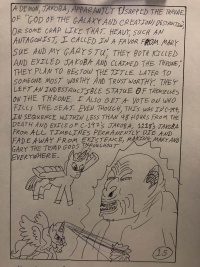 Chris featured Jakoba, an OC created by Sockness, in Sonichu 14. As Sockness put it: "She drew Jakoba, from one of mine when her CPU pals wanted to see the Rokat.[10]" The two have seen relatively little interaction since, though other weens have tried in vain to push them closer together.[11] In August 2019, Chris, through his Magi-Chan sockpuppet on Twitter, naïvely dismissed Sockness's violent inclinations and approved the idea of him coming to visit.[12] It remains to be seen whether Sockness will meet any of his goals concerning Chris.