Difference between revisions of "Kun T’Nyuget" 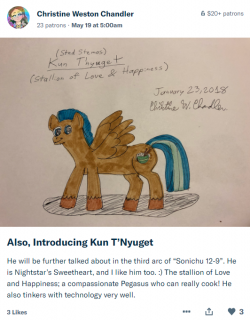 Kun T’Nyuget, pronounced Cunty Nugget, later known as Kun Hanhphuc, is an OC the Idea Guys inserted into Chris's fantasy world. Kun's primary purposes were in brainwashing Chris into believing he's bisexual[2], to infiltrate the comics a la Simonla, and to make a fool out of Chris by tricking him into using his pun prank name.

He is a Vietnamese pony shipped with Chris' My Little Pony insert Night Star. Idea Guy Joshua Wise had told Chris the surname T'Nyuget was Vietnamese for happiness, which Chris parroted. After the Idea Guys were removed from power, Chris retained many of their ideas, in particular latching onto Kun, canonizing it into Sonichu and continued featuring it in comics and artwork such as TSSSF cards as well as maintaining that he is Night Star's lover.

Chris's insistence on keeping the character vexed Guard Dog Null, who persuaded Chris to change the name to its correct translation, Hanhphuc[3][4].

Kun is featured in Sonichu 12-9, in the third and fourth storylines. The Idea Guys primarily wrote the third storyline, and Chris finished the fourth after they had been removed from power.

Kun is mentioned in Sonichu 13 as one of the reasons Chris believes he is bisexual.