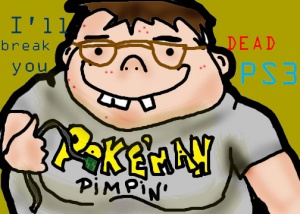 On 5 May, Chris dismantles his life upgrade.
File:Yasg.jpg
On 8 May, Chris is rejected by social rejects.
File:Chris gay trucker.jpg
On 20 May, Chris talks about his favorite comedians and rants about the Cleveland Show again for almost ten fucking minutes.

May 2010 seemed to be starting off with a whimper. Chris's radio silence seemed to have continued even after the uploading of the UNTRUE and DISHONEST versions of Sonichu 11. Many were proven wrong when Chris finally reappeared, boasting proudly that he had been able to disconnect the Wi-Fi Antenna from his Playstation 3, not realizing the damage he had done.

On 8 May, Chris won 4 tickets to an extreme sports rally. He called up Rocky to see if anyone in the young adult social group would want to go with him, but no one ever called back. Seeing as no one was going to go with him, he scalped three of the tickets and sat alone in the stadium next to a "lovey-dovey" couple while watching people with a far greater amount of success than him perform feats of acrobatics on motorcycles. After watching the events, Chris returned home lonely and upset, and made a video, wherein he is closer than ever to realizing how big of a fuck-up he really is, but, unsurprisingly enough, he blames all of his current troubles on a conspiracy he believes the Greene County School Board have staged against him. A week later, he puts up another video where he uses another tragedy to garner sympathy.

On May 13, DariaCamacho, a "fan-manager" for Chris, is given access to the CWCkipedia and begins making massive and seriously needed update to the website. Chris has reverted them and Daria has questioned why he has done so. It's only a matter of time before these two have a falling out.