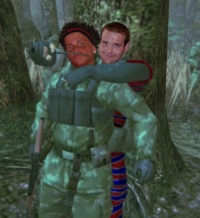 Metal Gear Solid is a series of stealth video games. Being that many veteran trolls emerged from the depths of /v/ (where wanking to Big Boss is mandatory), several MGS references have emerged. Even Chris has made some possibly unintentional nods to the franchise.

Allusions made by trolls

Chris has purchased Metal Gear Solid from the PSN; however, he most likely has not touched it because he's too busy playing Guitar Hero, Brutal Legend, LittleBigPlanet or Wheel of Fortune and the fact that sneaking behind enemies instead of attacking them head-on is too stressful for him. The Metal Gear Solid games are known for having a lot of homoerotic themes, whether or not Chris is aware of this is unknown.