Michael Snyder is ColdHearted and Mean 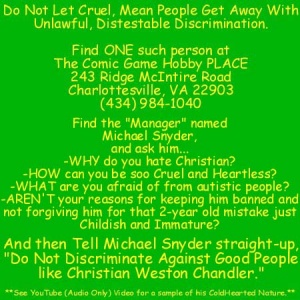 Chris overestimates his own power as he begs the masses to support his cause.

Michael Snyder is ColdHearted and Mean (full title "04122010 - Michael Snyder is ColdHearted and Mean (Audio Only).MOV") is an audio recording released by Chris chronicling an attempt to get himself unbanned from The GAMe PLACe by confronting Michael Snyder, the manager who permanently ejected him from the store in the summer of 2008. Chris recorded their conversation by hiding a video camera in his pocket. The phrase "ColdHearted" in the title is supposed to be a play on the title of Pokemon HeartGold.

As usual, Chris adds this to his list of fails as Michael is unmoved by his attempts to get back in, and is entirely justified in this belief. According to Michael himself, Chris's plea was a script he had written down on a piece of paper.[1] He also, it seems, can't remember why he was kicked out of the store in the first place. He mentions a "Wii incident," an occasion where he angered the management with his regular habit of taking over the store's television with his video game consoles, but otherwise he appears to be genuinely confused as to why Snyder won't let him back in. Oddly, yet hilariously, Chris adds to his streak of racist videos by shouting "JEW!" at Michael as he leaves the store, like a certain other egotistical fat kid. Of note, Michael is not actually Jewish, and the last name Snyder (or Schneider) is German in origin.

The conversation took place on 12 April 2010 and Chris uploaded it to YouTube later the same day. Shortly after it was posted, the recording was removed from YouTube due to a terms of use violation, either because of Chris's anti-Semitic attitude, because the recording itself may have been illegal, or because of the dox and incitement to harass dropped in the description. In the early morning hours of the next day, Chris added a text-only image on the front page of CWCipedia accusing Michael Snyder of discriminating against him for having autism, and linked to a troll mirror of the deleted video (which he had mistaken for a fan).

One way or another, this video is absolute proof of Chris violating the law—he dropped into the store unannounced with full knowledge that he wasn't supposed to be there. Virginia defines this as "trespassing", which is a crime punishable by a fine not to exceed $2500, at most one year in prison, or both. According to Mimms, cops were called after this happened, though Michael was unable to press the issue.

Prelude to the madness

On 21 April 2010, a woman named Jackie dropped a number of e-mails[2] between herself and Chris. In one of the letters, Chris reveals that he attempted to go to The GAMe PLACe after church the day before the video was released. When one of the cashiers saw Chris and recognized him, he threatened to call the cops. Chris got angry and bolted.

Finding out Michael Snyder would appear the next day, Chris had his plan - approach Michael and attempt to get the ban lifted. Chris's plan was that if Michael did not lift the ban after this long, he would call the cops. Chris hid a camera in his pocket with the intent of using it as evidence in the event he had to resort to this.

[Chris is speaking into a recorder. From the sound of it, it seems like he is inside his car.]

Chris: This is Christian Weston Chandler, Captain's Log. Stardate... 4:34 PM, Monday, April 12, 2010. I am about to go into the Game and Comic Hobby Place — also sell toys there — to get myself, to try to get myself unbanned and get forgiveness for the mistake I have made almost a year ago when I was banned from the store in June 2008.

Chris: The dude who banned me was, his name is Michael Snyder, possibly a Jew considering his last name. Nothing bad against the Jews, but I'm just throwin' it out there. Alright, so, here I go. [sigh]

[Chris turns off the engine and leaves his car. He approaches The Game Place, and the chime of the store's door alarm can be heard as he goes inside. "Every Morning" by Sugar Ray faintly plays in the background, while we get a good view of the inside of Chris's pocket.]

Employee: Yeah, he's in the room back here.

[We come upon Michael, who is fixing an RC car. His remarks are occasionally interrupted by whoever he is helping. Judging by the audio, Chris is standing relatively close to him, close enough to occasionally hear whoever Michael is speaking with.]

Michael: Well, I mean, you're, you, you'll just see that by running it. I mean, it was running okay the other day. But just, you know, adjust it one way or the other depending on temperature and everything else. But, you know, it just, it's not usually much. By changing fuel, it doesn't usually change... tuning that much. Mmkay... Uh-huh. Yeah, no, it'll be fine... Right, yeah, it'll be fine. [pause] Okay... Okay... Who made it?

[The recorder seems to move away from the conversation, and a long silence follows. Various store noises occur in the background, including the bell from someone opening the front door.]

Chris: Come on. I mean, it has been almost two years, and it's just been on my mind for so long, just be...

Chris: [sigh] But, can't we just forgive and forget?

Chris: And I have really...

Michael: No. No. You need to leave now.

Michael: No! You need to leave now.

Chris: How can you be so heartless? I mean, you're, I mean, you're obviously not as mean as one of those trolls I've been dealing with...

Chris: I mean, come on, I mean, obviously you have something against me, [four beeping noises are heard, possibly Michael dialing out to 911] because aside from the Wii incident, I just would like to know what. Come on. Gimme a break. Alright, fine, I'll leave.

[His tone becomes sharp and angry.]

Chris: But I hope that God will forgive you for being so heartless and cruel, Michael Snyder!

Michael: He probably will.

[Chris goes out the door, tape runs out.]

During the confrontation, Michael called the police. However, Chris was long gone by the time they arrived.

On the linked YouTube page the opposite party, Snyder, chimed in to inform everyone that, while he had attempted to press charges against Chris for trespassing, the police informed him that he had no recourse to pursue legal action for Chris's trespassing or attempts to incite harassment. It all seems for naught anyway, as Snyder mentioned that, not only did he not receive any harassing messages, but he actually got messages of congratulations and encouragement for putting Chris in his place.

A video with video

The next day, Vivian Gee made a South Park-style animation using the audio from this clip. Christian himself stopped by to make the following comments on her video: