Difference between revisions of "My Little Pony Protests" 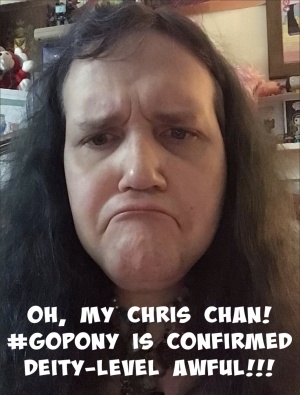 The My Little Pony Protests are a series of tweets, videos and TSSSF cards wherein Chris attempts to convince Hasbro, the owners of the My Little Pony franchise, to continue producing five more seasons of the cartoon series My Little Pony: Friendship is Magic, and to cancel the spin-off series Pony Life or as Chris calls it GOPony (in mocking reference to the Teen Titans Go! cartoon). He says his Imaginary friends from the MLP dimension have asked Hasbro to continue the series and cancel the spinoff. At BronyCon 2019, Chris also informed Nicole Oliver, the voice of pony character Princess Celestia, that "The Retirement is Not In.[1]"

Friendship is Magic, the fourth generation, or G4, of My Little Pony, ran for nine years, from 10 October 2010 to 12 October 2019, and is slated to be replaced with a fifth generation set to premiere in 2021. As the G4 incarnation is one of his favorite shows, Chris was unwilling to face the fact that it was ending, instead retreating to his delusions and "foreseeing" that the show would instead continue with a plot he imagined up.

Chris is probably just disheartened about rumors[3] he's heard about the new G5 incarnation switching up the designs of some characters. Remember, Chris believes cartoons are real. So to him, any story changes would mean real-world consequences for beings he believe to exist in other realities; and the discontinuation of a cartoon series would result in the perpetual stagnation of its world, or possibly its demise.

On 13 August 2018, Chris uploaded Hasbro! MLP G4 Must Continue; NO MLP G5!‎, addressed to Hasbro and the people of Earth 1218, stating that he has divined the future, and is highly concerned about how Twilight Sparkle, Fluttershy, and Pinkie Pie could have different features in G5. He says his fears have been confirmed by conversing with fictional pony Princess Celestia, and urges Hasbro to cancel G5 and instead produce more G4.

Using his homemade TSSSF cards, Chris posted to Twitter his vision of how the G4 story should go, tagging Hasbro and hash-tagging the various voice actresses on the show.[4] 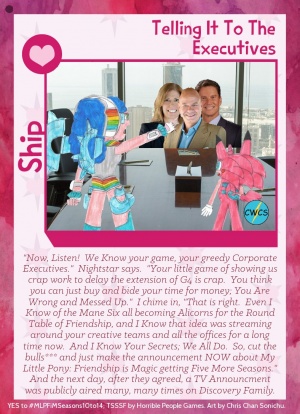 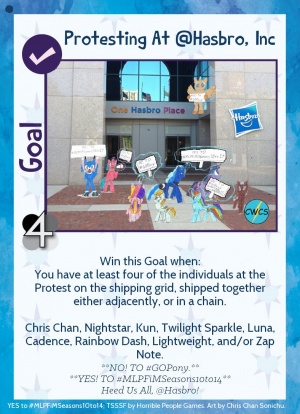 In his complaints, Chris compared the G4.5 series to Teen Titans Go!, a cartoon he dislikes and has described as "slap dash" and just "random jokes and gags":[5]

On 21 June 2020, the first episode of Pony Life premiered. Chris hated it and posted a selfie of him with a cartoonish frown on his face to express his displeasure, calling it "Epic Garbage" and "DEITY-LEVEL AWFUL".[2]