Piedmont Virginia Community College, the realm of the evil witch Mary Lee Walsh, is the educational institution where Chris earned an Associate's in Applied Science and a CADD certificate in addition to making the Dean's List, or so he claims.[1] Walsh, in her role as student dean, gave Chris a difficult time on his love quest and at points shattered his heart, lowering its level to nearly zero. Chris in turn made her a character in his comics and inspired the villain group the Private Villa of Corrupted Citizens.

Kicked Out of English

When he realized that "Wednesday's Child" from English class is a story about an autistic girl who brutally murders people, Chris told his male professor that by golly, he is autistic too! This caused Chris to be ejected from that class on 24 February 2003, Chris's 21st birthday. According to Chris, the reason was the prof's misunderstanding and fear of autism. Chris cried and later passed the course with a female professor.

Other than re-enforcing Chris's hate of men, this event is what made Chris start his love quest.[2]

According to Emily, there is more to this story than Chris lets on: "He finally admitted that it was during a group session and the topic of homosexuality was brought up. ... He said something derogatory about gays or said something in an inappropriate way about them."

Kicked Out of College

The college itself is intolerant of those who are love questing, and makes extra effort to cockblock any males on its campus by brutally censoring any signs that show the least bit of romance.

By mid-October 2003, Chris had been using his Attraction Sign for 2 months without success for his love quest. Mary Lee Walsh, under the impression that Chris was soliciting sex, seized the sign, yelled at him in a very violent manner, and harshly criticized his methods. Chris made a new sign only to have Walsh sabotage his plot again in a few weeks. This served only to make Chris rage and spam the college with his ads. As a result, Walsh gave Chris a stern lecture, banned him from PVCC for a year, made him take an anger management course, and forced him to see a shrink.[3] To further enhance the fail, PVCC is largely considered something of a joke, even by other local community colleges. So he basically didn't just fail at community college, he failed at a community college that failed at being a community college.

After five years of hard work to get his two year degree, he graduated with an Associate in Applied Science and a CADD certificate.

Compared to his high school graduation, he didn't seem to give a fuck. Of note, Chris wore not only his Sonichu Medallion, but his honor roll band from high school. 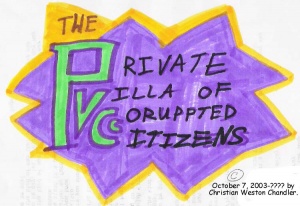 Christian Weston Chandler refers to Piedmont Virginia Community College as the Private Villa of Corrupted Citizens and Piedmont Virginity College on at least one occasion due to numerous grievances he has with the school. Although it is known that PVCC and its dean Mary Lee Walsh interfered with Chris's Love Quest and the distribution of the Sonichu's News Dash newsletter, it remains unclear which particular incident inspired him to coin the term. Within the context of his Sonichu comics, Christian has characterized the Private Villa of Corrupted Citizens as the headquarters for for the collective activities of the supervillains of CWCville.

As you can imagine, when Cogsdev decided to create the troll message boards, it just had to be christened with this name.