Difference between revisions of "Song for Jackie.MOV" 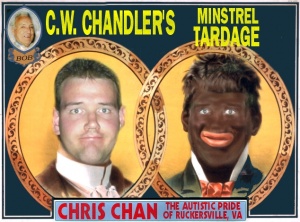 The greatest show on Earth.

Song for Jackie.MOV is a video uploaded by Chris to YouTube 16 September 2010. At Jackie's direction, Chris dons a turban and puts on blackface to resemble Mr. Popo from Dragon Ball and "sings" his version of "Mmm Mmm Mmm Mmm" by the Crash Test Dummies. Chris changes the lyrics greatly from the original song, turning it from a meaningful '90s alt-pop tune about the isolation of children with abnormal lives, to one where he warbles off-key about a boy and a gal-pal falling in love. Then, he rounds out the performance with a minstrel song adapted from the Spike Lee movie Bamboozled, his manboobs flailing wildly with each gyration. 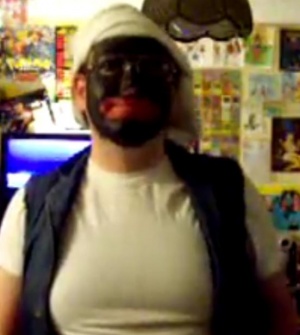 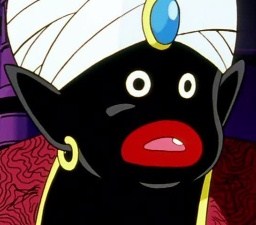 Mr. Popo, who Chris was trying to impersonate in this video

[fake-sounding accent] 'Ello. I am glasses-wearing genie, Mr. Popo! [nods and folds his arms, then turns on audio] I tell you a story. It is a good story. You will enjoy story.

Once, there was this boy [flashes manboobs] who
Was born with some autism and yet, made a few friends.
But after his high school years,
He...lost...his friends and was troll-tortured
By bullies who were jealous
of his material things [wiggles his head from side to side and waggles his finger] Nonononononono.
Mmm mmm mmm mmm, mmmmmm mmm mmmmmm...mmmmm...

Once, there was this girl who
Continued to have friends long after high school.
She could have had her pick of men,
But then, she found the wayward lost boy.
They matched up very well, heavenly matched...
Loooove, it was so!
Mmmmmmmmm mmm, mmm mmm mmm mmm mmm...mmmm...
Mmmmmmmmmmm, mmmmmmmmmmmmmmm...

And both [starts to say 'boy', turns it into 'girl'] boirl and boy were glad
When they both saw each other's eyes.
When they met up!
They both thought of each other. Very often!
They had enjoyed each other's company
Sweetly, oh, rollercoaster ecstasy.
In fantasy, their days were simple
And! They looked to be married and have their own boy
And girl. It's true!

[begins to dance what is most likely a continuation of whatever Minstrel Song he saw; a mockery of African aboriginal dancing]

[spoken] Happy loving! Between me and Jackie! I love you sweetheart. Boing!