Sonic Rebuilt is a crowdfunded shot-for-shot remake of the 1996 OVA series of Sonic the Hedgehog, released on 6 March 2020 after some delay. It is the second of such project from 3GI Productions, who previously did the similar Shrek Retold.

Once again, Chris took part in the project, this time being assigned to scene #63-69, where Sonic goes out to rescue Tails and Old Man Owl from a burning jet. For his scene, Chris simply traced most if not all of his art to the original scene and have Sonic transform into his own creation. Like the last time, it appears a third party is doing the animations for him. 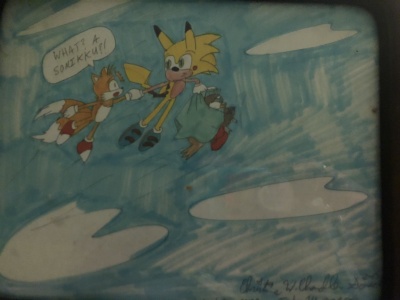 A bonus panel by Chris