Difference between revisions of "The Suitress"

"The Suitress" is the codename of a young autistic[2] woman who developed a sort of crush for Chris. This codename was created out of courtesy for things that occurred to her, and for her own good. She had been set to meet with Chris during the August 2021 Everfree Northwest convention, but Chris by this point had found an alternative lover.

Thought by some as the heiress of Megan and The Wallflower, she was the first to leak chunks of the Incest call, although at the cost of having herself exposed by Bella's frantic attempts to shift blame off herself.

Previously living a rather normal life, the Suitress discovered Chris sometime during the start of the COVID-19 pandemic,[4] out of boredom. She soon saw him as a means of coping with the hardships of quarantine, taking pity on him and reveling in the ways she was "not Chris". This would prove itself to be a vicious cycle that would lead to some of the events that occurred afterwards. Before finding out that Chris was having sex with his mother, the Suitress seemed to have had complicated feelings towards Chris's character, seeing him as a broken person with needs she could fulfill herself; part of the reason for her crush, which stemmed from the aforementioned pity for him; whilst also finding him deplorable.

According to the Suitress, she first became aware of Chris through the Youtuber, Deadwing Dork, who would mention Chris time and time again. She claimed that she began researching him out of curiosity, first feeling disgusted by him, a feeling that would still persist and conflict with the crush she'd form on him later. The Suitress would later form a more serious interest in Christory in the July of 2020, watching Geno's documentary series with a friend, and reading articles from this wiki extensively. The Suitress would also claim that she would start having "feelings" towards Chris on the September of that year, which later started evolving into a full-on crush when she listened to the audio regarding Chris's date with Emily in November.[3]

During that period, she would not long after become an active member in the CWCSphere, making fan art and posting regularly on Discords dedicated to him, along with moderating the Chris subreddit starting on January 2021 after going quiet on one of the Discords she frequented the month before.[3] It is believed that the Suitress attempted to start talking to Chris in 2020.[citation needed] Her fascination with Chris would lead her to beg him to reply, even before her self-admitted crush had developed.[5][failed verification] These attempts at contact were made despite the Suitress having been warned several times not to do so. 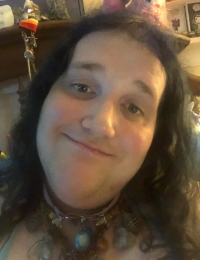 A selfie sent to the Suitress by Chris.

During her time as a Reddit mod, the Suitress discovered Chris's phone number, and she was finally able to text Chris sometime afterwards. She used a pseudonym while talking to Chris, and also (unwisely) shared other pieces of her personal information with him.[2]

By 15 July 2021, she and Chris were on good terms and seemed to be reciprocating feelings for each other; he recorded an audio file promising not to get upset in front of her at the Everfree Northwest convention over the MLP G5 cartoon, and said he loved her.[6]

On 19 July 2021, Chris invited her into the Knights of CWC Discord server hosted by Sean, where Chris introduced her to Bella.[7] The Suitress began to converse with Bella at that point, seemingly unaware of Bella's true intentions. Chris, having proposed the invite, shared the personal information the Suitress provided him to Sean, disregarding her wishes that Chris not share it with anyone else.

From what is known about the interactions between Chris and the Suitress (and some that Chris had with Bella), Chris appeared to stress the importance of "encouraging her" and "boosting her self-confidence" to find a long-term sweetheart at her college, believing himself to be some sort of mentor for her. At various points, Chris would mention being in an "open-relationship" with the Suitress and his "Lady Friend" (Barb). Chris had seemingly developed a sort of infatuation with the Suitress himself. Despite this, he had stronger feelings for Bella and already had sex with Barb by this point, indicating that the boundaries of his Love Quest had been widening, even before his incest with Barb had been discovered.

The Suitress was seemingly one of the last people that Bella recruited into her Chess Club Discord Server. There, the Suitress hadn't seem to have done anything particularly noteworthy than play games of chess and converse with Bella about their plans with Everfree Northwest. Bella also acted accepting, even supportive, of the Suitress's crush towards Chris around her, which contributed to as to why she stuck around with Bella.

The Suitress was originally going to go on a trip to the brony convention Everfree Northwest, and meet Chris there. Bella was also to attend this event, claiming to act as a "photographer" that would photograph everything, and "bodyguard" to Chris to protect him from Jacob Sockness,[8] as Sockness had declared plans to attend in disguise to meet with Chris.[9] Whether or not Sockness would've actually attended the event is unconfirmed, however.

Bella, herself sexually attracted to the Suitress,[10] had rather unnervingly claimed in Discord leaks that she planned to "steal" her from Chris to "protect" her.[11] When Chris invited Bella to be his dance partner, he invited the Suitress at Bella's suggestion, though Bella claimed she intended to just dance with the Suitress as Bella thought her to be cute. In addition to her support for of Chris's incestuous relationship with Barb, Bella also showed support for the planned copulation between him and the Suitress in the hotel they would stay at during the event. This is most notably demonstrated in the longest leak of the incest call, where Bella talks about the Suitress being "newer in the bedroom" and encouraging Chris to "have a lot of fun with her" when they do so.[12]

Whoever's initial idea the copulating was can only be guessed at, but the Suitress showed a willingness or agreement to engage in this activity.[13] Regardless, Bella told Chris that as his "photographer", she'd make a slideshow of the photos and videos she was going to take of them getting "romantic".[12] Bella had also said in a conversation with the Suitress that she was pushing Chris to have sex with her. [13]

After this point, Chris did not seem to show as much interest in the Suitress, focusing his desires on Bella instead. This made things more difficult for Bella; when she tried to book a room for the both herself and the Suitress, Chris kept insisting that a room be booked for both him and Bella.[10]

Chris recorded an audio file for The Suitress promising her he would not get angry upon seeing the rebooted My Little Pony cartoon at the convention.[6]

Bella shared with the Suitress a 9-minute leak of the incest call in private[15], telling her that Chris was having sex with Barb. This heavily-edited leak would only include bits of Chris's and Bella's dialogue, and remove both the identities of the Suitress and Bella. The Suitress was to leak this video to the public. Bella also told the Suitress that Barb had been grooming Chris throughout his life.[13] The Suitress came to believe this initially,[16] and seemed to believe that she could save Chris from Barb. The Suitress, disgusted by the revelations[17] and beginning to realize that Bella was up to something, wisely became hesitant to continue any involvement with Chris,[18] especially as it became increasingly clear that Barb probably couldn't consent to any of what was taking place.

The Suitress then at one point asked for the full call, but was always given excuses by Bella as to why she couldn't share it with her, including that her phone would "record randomly". In order to prevent any further questioning, the Suitress was seemingly given the full call, but Bella lied to her by telling her that she already sent the full call to the police, and faked a 911 call. This was done so that the Suitress wouldn't get any authorities involved.[19] 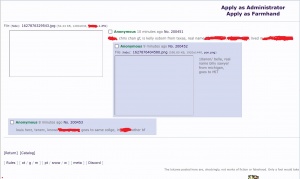 Bella manipulated Sean Walker of the Watchmen into releasing a screenshot she had falsified and to name the Suitress as his source.[20] Sean further decided to post a video of the Suitress, linking her face to the name mentioned in the incest call and directing attention onto her.[21] Bella also attempted to drop the Suitress's full name and photo on multiple websites such as 4chan as a means of doxing her, while also claiming that she was dating Chris despite her distancing herself from the situation, and that she was underaged. Bella would also attempt to distance herself away from the "Kelly Osborne" and "Bella" codenames she was using at the time, and directed them towards a made-up person "Billy Sawyer".[22] Screenshot of a video Chris sent to the Suitress from the hotel he stayed in.

After GiBi leaked her phone number, already carrying the weight of her addiction towards Chris content, Chris fucking his mom, these events making headlines, Bella and Sean dropping her personal information on other websites, and now a channel she once followed engaging in Bella's attempt to frame her, the Suitress had an alleged nervous breakdown, and was put into behavioral therapy the following day. According to posts she made on the various accounts she tried to use soon afterwards, she had later developed a disliking for Chris. Chris had also attempted to reach out to her again, even after she had tried distancing herself from him, from the hotel he stayed at prior to his arrest. In this attempt, he sent her photos, one of which being a screenshot of the "Top 10 Hottest Moms".