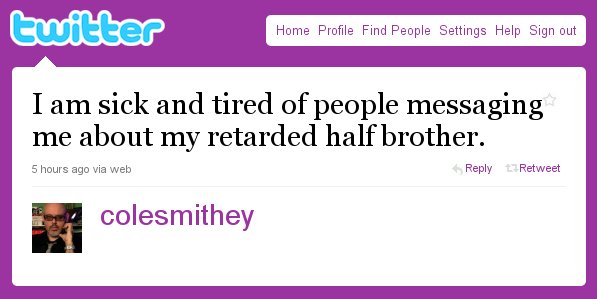 I'm not sure how much you guys know about what happened here. The only people that really do are a friend of mine and me, since he told me what he knew. My friend was intrigued when Chris claimed to have a new gal-pal named Chloe in one of his videos, who he allegedly met at Gamestop and they were both buying Littlebigplanet. So, my friend naturally called every Gamestop in Chris's area several times until he got a girl. The girl confirmed that she was named Chloe, and they then proceeded to have a conversation about Chris.

Chris was going to the store on a daily basis loitering just to be in the presence of Chloe. He would spend 30 minutes before finally deciding to buy a pink DS stylus, then ask Chloe stupid questions like "do you like Sonic the Hedgehog"? There was also one particularly creepy example, where he asked if she drunk or smoke. She said that she drank and he said under his breath so it could just be heard, "We'll have to change that".

In addition to this hilarity, since Chloe worked at the counter, Chris was often approached by male employees who asked if he wanted any help, since he was loitering for hours on end. He showed contempt for them and told them to go away, since he was waiting to be approached by Chloe. Thankfully he fails to understand how job assignments work.

Chloe noted that Chris was extremely unsettling. His voice would crack frequently when speaking, he smelled terribly sweaty and would leave sweat all over the stuff that he picked up and pretended to be examining, and she thought she saw him get a boner at one point.

So what did Chloe do? She decided that she was going to quit and get work at another Gamestop for the sole purpose of avoiding Chris. She had asked the male employees there to tell Chris something else when he inevidibly investigated. Keep in mind that at this point he had made some video on the internet where he claimed that she was his girlfriend, which was a complete tangent from reality.

When my friend checked in later, she was still working there. As luck would have it, all nearby Gamestops had no open positions, so she was screwed. At this point in time, the fucktards at ED had given Chris the $400 Gamestop giftcard, so he was going there on a daily basis buying $1 items just so he could stalk Chloe.

What makes this particularly depressing is the fact that he wore his gift card around his neck, just as he did the Sonichu medallion. He also bragged to Chloe about it as if it made him attractive somehow. At one point, he offered to buy her anything in the store for free, as long as it was under $15. She refused, as it was against store policy.

Other things of note: - My friend really liked Chloe, since she played games like TF2 - Chris did not turn up to stalk her the day it was announced that Obama won - Chris preordered Animal Crossing: City Folk and wanted Chloe's friend code

Chloe's current status is unknown. Based on the fact that Chris is after that random waitress, he may have given up on her.

Unfortunately, I have absolutely no evidence whatsoever for my claims. This is just what my friend found out by calling the place up. Also don't post this on ED, the faggots there don't deserve to know this, they should be asking the same questions over and over again in the talk page instead.