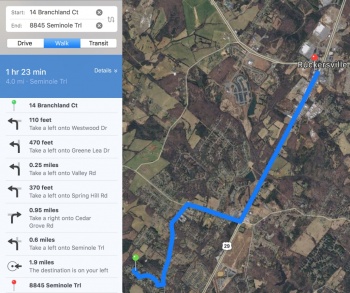 According to his Fitbit, Chris accumulated 23,000 steps on this day. If true, it means he had walked just under 11 miles (18 km)[2] in total—which is quite possibly the most exercise Chris has gotten in his entire life. Though Chris was visibly tired by the time he reached the post office, this remains a rare example of where the fatigue from such exertion is actually warranted, a far cry from Chris’s struggles to run more than a few tens of metres at a time in the filming of Sonichu's Edge several years prior.

2:09 - 4:11 [Chris continues on his way, with a sequence of short clips showing him walking across the entrance to a small strip mall's parking lot, then on to a verge next to a busy intersection. Chris then begins walking down the side of another quiet main road.]

4:17 - 5:59 [Chris continues walking along the main road, looking reasonably smug and surprisingly not winded. A jumpcut reveals that he's now walking along U.S. Route 29, which in this section is a 4-lane dual carriageway with a median strip in the middle. Chris seems to be walking quite close to the edge of the road, as oncoming traffic appears to be uncomfortably close to his position next to the verge. He then proceeds to film the traffic for a while as he begins to approach a crossroads with a vehicle repair workshop visible nearby. He stops at the turning, then turns around to find that he just walked past a dog that had been killed by a car and thrown into the verge.]

5:59 - 6:13 [Chris moves on, walking past the crossroads, but then hesitates and begins walking back towards the carcass.]

[Groan] ..."Poor little animals just get turned in to Street Pizza. [Points camera towards the workshop] And that's where my car's been hangin' out thar. While the radiator had a hole in it!"

7:00 - 7:15 [Jumpcut. The rain is heavier, audible in the background and puddles are visible on the surface of the road, but Chris doesn't seem to mind too much.] "It's raining, it's pouring, I'm enjoying it! In my face! In my faaaace! Yay!!"

Chris returns triumphantly home. Lauding his accomplishment of this mild athletic feat, he buoyantly shows off his damaged shoes, then reminisces about his time at BronyCon. Chris concludes with some boasting of his endurance.

[jitters camera around before pointing at his watch]

Yep. Anyway, it'll be worth it to definitely- when I get to walk up to the... [smiles creepily] garage which is not far from here, pick up my car soon. Hmm... Actually, I have something else. I have this bag, uh, pair of shoes here that I was going to wear to the Grand Gallopin' Gala but these were the things that, like, "Sorry, it's against the dress code". It's not even cosplay? I had cosplay. I mean, I had frillings, and horn, and ears, and my cutie mark... And also, I'm definitely going to be using part of the recent donations to get a new pair of shoes, 'cause my right shoe... [pan to his shoe which is falling apart]

Look at that. Look at that. [pan back to Chris] But these shoes are gonna be legendary because... they've been on my- off and on my feet for months, they've seen extensive walking and running... Oh yeah! So these will go down in history along with the iconic shirts and my Vinyl Scratch skirt. I don't necessarily have a pair of jeans picked out for it, but it's like, I have plenty of pairs of jeans on that and it's the complete set so this is like... One, two, three pieces of a complete outfit. The complete ensemble for legendary status. So take from that what you will, it's all... AWESOME AS WE WANNA BE! And I will definitely be wearing my backup pair of shoes here for when I take my walk to pick up my car later. But, aside from that, I do thank y'all so much for... donating to help me in this emergency situation. And... ya... The money will be spent... to pay for the car... as well. That's all very good. I'm not cheating anyone! Everyone should know that by now! I'm direct, I'm honest, I'm sincerely kind, I'm awesome to hang out with... OK? [blows into his hand]