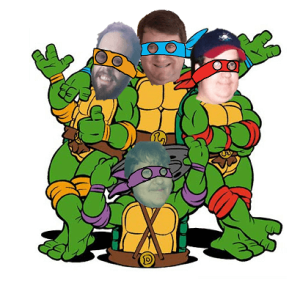 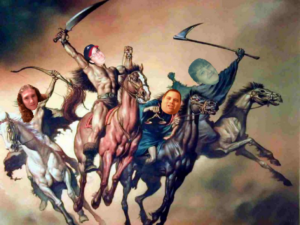 The Four Horsemen of the Fail-pocalypse.

The Unholy Tetrad is a term used by Christorians to refer to the four types of people that attempt to interact with Chris, but end up receiving backlash and/or mockery from others as a result. These include:

To date only one person has become every aspect of the Unholy Tetrad, and that is Jacob Sockness.

There is nothing wrong with feeling sorry for Chris, but without a combination of really tough love and proper resources, White Knights can unknowingly be as dangerous to Chris as the other three (sometimes worse), especially if they play along with Chris's belief that CWCville and his characters are real, or donate large amounts of money that Chris will blow away on conventions, toys and video games.

The level of devotion by White Knights vary greatly: the most moderate either back down or ask for a second opinion before making a fool of themselves, but the most fanatical may defend Chris even when it is clear as day that Chris was in the wrong.

Some weens and malicious enablers may adapt one or more tactics from A-Logs as part of their attempt to ruin Chris's life: examples include flooding listings of locations that Chris go to with negative reviews about him, or pure extortion in an attempt to brute-force misery or physical harm on Chris.

Enablers are people who consistently feed into Chris’s bad habits. Unlike all other groups in the Tetrad, enablers come in all kinds of varieties. Some play along with Chris's beliefs about himself and the rest of the world. Others will donate money to him despite him imminently wasting any kind of money he already owns. All enablers do these things, and many more, with various intents and purposes.

Enablers usually agree with, and form a religion of, Chris's belief that CWCville and his Electric Hedgehog Pokémon are real in the so-called "dimension" of C-197, where all other fictional characters and OCs live, plus a multitude of other dimensions, and that he is the CPU Goddess of that dimension and that the Dimensional Merge, the apocalyptic event where Dimension 1218 (the dimension we live in) merges with C-197 into "Dimension 1C-211987" to bring fictional characters and OCs into the real world, will happen in the very near-future. They also usually donate large amounts of money that Chris will blow away to fuel his Peter Pan lifestyle. However, some enablers and weens (such as the Idea Guys) exploited Chris's weak grasp on reality for nefarious purposes.

Enablers are the most harmful to Chris, because it only fuels his already hyperinflated ego, in which he answers to no one but himself, and that people will always provide for him in all cases. In the case of the Idea Guys, their exploitation of Chris's naivety not only corrupted the Sonichu lore, but their extortion nearly caused financial ruin in May 2018.[2]

In the 21 years since the creation of Sonichu, Chris's grasp on reality has deteriorated to a point that some White Knights face having to play along with Chris's beliefs to get in touch with him, and even after that there is no guarantee that Chris will follow their advice.

The works of the enablers are so well recognized by Chris himself that he refers to them officially as Devotees of Chris Chan Sonichu, or more simply devotees.

Weens are people that try and fail to ruin Chris's life. Examples of weening include trying to get him banned from places or websites that he visits, persistently spamming Chris's social media feeds with pickles and similar stuff to annoy him, or trying to get Chris kicked out of his house by getting the local authority to condemn his house for demolition.

Regardless of how the term is used, trying to annoy Chris is utterly pointless, as Chris is no longer negatively phased by most trolling attempts. Attempts to ruin his life are also a very bad idea, especially with the devastating impact of the Idea Guys, and the escalating Financhu Crisis. The same goes for trying to harass places for having Chris as a customer or patron: some have now started to preemptively ban him, since they have better things to do than deal with wannabe trolls flooding their social media channels.[3]

Along with the established four groups above, Tetrad members may also be classified as at least one of the following:

Orbiters are people who obsessively follow Chris’s life to unhealthy levels. All four groups tend to fall under this category depending on who one is referring to.

Carpetbaggers are people who exploit Chris’ infamy for views and internet fame, whether it be through interviewing him for this purpose, or through having him star in a project purely for fan service. Carpetbaggers can be thought of as kind of pseudo-ween, as although they try to win fame through Chris, they actually manage to be somewhat successful in their endeavors.