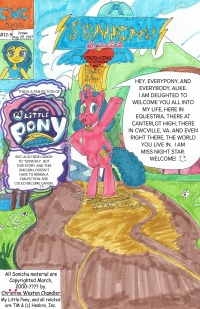 Sonichu #12-9 (formerly Sonichu #13) is the 14th issue of the Sonichu comic series. The unusual title is due to Chris's superstition about the number thirteen. The name "Sonichu #13" would later be applied to the next issue on 29 August, 2019, thus confusing readers into thinking that this issue is a sequel to Sonichu #12.

The plot of this issue was heavily shaped by the sagas and events in Chris's own life which occurred during the 14 months he worked on the comic – namely, BronyCon and the Doopie, Jessica Quinn and Idea Guys sagas. Influence from the Idea Guys features heavily in the third act of the comic, as the writing suddenly veers into edginess and their OC, Kun T'Nyuget, is also inserted as Night Star's lover.

For those interested in the Sonichu series, this is the final completed "true" Sonichu comic; the next "comic", if it can even be called that, is an incoherent mess of Idea Guy lore that is almost completely uncolored, and every issue after that is even less complete (missing many pages). Chris will probably never continue work on the remaining issues, due to his arrest for incest.