Chris posted six samples of his work, which he claimed were already sold, as examples of his craftsmanship. A conversation with an anonymous male friend reveals that Chris had produced these commissions for a select few during the previous month. Presumably this success inspired him to go public.

Several customers made the decision to fork over money for personalized artwork by Chris. The finished masterpieces are shown here.

For this work, the recipient (Trickie asked Chris to draw a scene from her comic, "Rosechu's Story." Her response to Chris's effort: "I'm pretty happy with basically everything except for the fact that he forgot that the pokeball is supposed to be opened, which I specifically requested."[1]

The buyer sent the following request to Chris:

This was followed up by correspondence:

The result is one of the most surreal and autistic works Chris has ever produced. What it means is anyone's guess; his description offers little help. Chris made sure to scribble over the offensive torsos of the wrestlers and Chibi with black marker. The drawing came covered with hair of unknown origin.

A Japanese industrial/noise/experimental band called L'eclipse Nue (https://www.facebook.com/pages/Leclipse-Nue/189265644421174?pnref=story) commissioned Chris to produce the cover to their album "Negative." The album was released in February 2015.

The buyer asked for a picture of "Colossal-chan and Mitch Sonichu staring down with CWC as the referee."

The recipient asked for a picture of "CWC shaking hands with Clyde Cash."

The recipient explained, "I asked for Sonichu and Chris to be fighting Clyde, Asperchu, Pickel suit, and Brown shirted imposter, with Meg, MLW, and Snyder watching. Chris isn't good at following instructions."

The buyer's request: "About the commission, I would like these three fine gentlemans: http://i.imgur.com/hvmiqKf.jpg in a bar full of only gentlemen. And somewhere in the background I would also like Christian Weston Chandler to also be in this gentleman's bar. Again this is a gentleman's bar, only for men to go to, not gay, kind of like a "Boy's Night Out". And adding a few small talk between the gentlemen in the picture would be great! Thanks Chris!"

Drawings received a certificate and title only if they were the $200 version, or if they were for a repeat customer.

The buyer made the following request:

Chris sent three illustrations. They arrived with a handwritten explanation of the art:

Why, it's ALF and his girlfriend Rhonda from Melmac!

The customer requested a drawing of his fursona. While he supplied a picture of only the dragon's head, Chris came through with the entire animal. The buyer provided further details and appraisals in a video: https://www.youtube.com/watch?v=U5HFzNUQREQ.

The purchaser ordered this for a friend, a photographer. He told Chris he could draw anything related to photography.

In late September 2014, the True and Honest fan known as "Flufflehugs" created an original character named Mimi Rosechu, and asked Chris if he would be willing to include her in a commission.

Flufflehugs decided to order two colored comic pages in addition to a medallion. She told Chris her commission could be of whatever he wanted as long as her original character was included. Some time later, she placed a second order of two black-and-white comic pages about male lesbians. One month went by, and she had not yet received any of the pages. He sent her a series of excuses.

On 4 November he sent her an update:

Chris finally admitted that he could not complete her commission as she had requested, but hoped that she could accept his half-assed effort.

On 13 November Flufflehugs received her commissions:

Of course, this was not what Flufflehugs had requested. She had asked for two colored comic pages which incorporated her original character, and two black-and-white comic pages about male lesbians. However, Chris had failed to think of any dialogue for the comics, so instead he sent three colored pages of bad lesbian jokes and a laminated and certified color illustration of her original character. She expressed her dissatisfaction to Chris.

Flufflehugs requested that either she be allowed to return the four pages and allow him to try again, or that he refund her money. He gave a two-part reply:

Concerned about further delays, Flufflehugs kept in touch with Chris. On 18 November he wrote:

Inspired by recent revelations, Flufflehugs asked Chris if he would consider drawing a picture depicting tribadism. She also asked him to explain what the act consists of. He replied on 22 November:

Four days later, Chris announced that he was finally finished with her commission and was shipping it that day. But then, out of the blue, he asked his eBay customer a rather jarring question:

Flufflehugs responded that she was bisexual, and asked him about exercise, diet, and fashion. Chris gave a two-part reply:

For some reason, by 28 November he still had not shipped her order. By this time it was clear that he intended to send her three colored comic pages instead of the two colored and two black-and-white pages she had paid for. Consequently, she asked for the tribadism page at no extra charge. He relented.

On 1 December, she received the first three comic pages. Out of curiosity, she asked Chris if his recent coming out had had an impact on Comic Chris and other Sonichu characters. He replied:

On 9 December, she finally received the tribadism page, completing her order. In the image, Robbie was depicted with breasts (but no nipples), and he was wearing an unusual red belt-like object around his waist. Flufflehugs requested an explanation of the mechanics of male lesbian sex. He replied on 17 December:

So in the end, Flufflehugs received a total of eight color pictures, for a total cost of $150 dollars.

This is a portrait of the recipient, who writes: "She used my FB profile pic for it but I said to use any artistic license she wanted. I think she did the face and hair from the pic, but the rest is without reference and I think it's genuinely one of CWC's better pieces of art, the hands are cool, she got my hair right, the whole thing is so clearly drawn by CWC , but I think she put in some real effort with it!"[2]

The buyer made the following request:

This is the vocaloid Len Kagamine. Chris forgot to color one of the arms.

Since Liquid Chris's fate in Sonichu remained nebulous at best, a comic artist called Ben Saint commissioned a piece that explained Liquid's ultimate fate. To the surprise of Saint himself, Chris actually delivered. The piece was revealed in a YouTube lecture by Saint on the timeline of the Sonichu canon, and it includes commentary by Beel, Sonichu, Rosechu, and Chris himself.

The buyer requested the Sonichu family watching My Little Pony on TV in their living room.

The buyer asked for Bubbles Rosechu in red lipstick kissing Blake Sonichu, who's happy, dizzy, and lovestruck after giving her a big bouquet of flowers.

The recipient: "The story to this image is that I was on holiday to America because I caught wind of a special species of Pokémon that originated in Virginia and would like to meet one in person, Wild was the first to be open to talking with the foreigner. Erm... I can't quite make sense of Franziska's being there but since she's my favourite female character, I thought why not? I was interested in how Chris would draw her. Darren (my character) is in the background, hoping to get a chance to kidnap Wild for study of the strange species but his arch nemesis, Samantha the Hedgehog (me), is there and would defeat him if he got caught.

Bonus info: I requested for Chris to have Wild eating his favourite food, turns out it's teriyaki chicken and rice. "[3]

A generous donor posted images of her received character drawing and the filthy envelope it came in. She requested an illustration of "Rosechu waving to the viewer and looking cute."[4]

Another donor requested a sketch of a character dressed in lolita fashion. Chris chose Zapina: 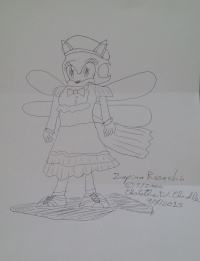 Another fan requested a drawing of a fan character who was "a big fan of Sonichu and a proud homosexual male." For absolutely no reason at all, Chris chose a Garfield theme: 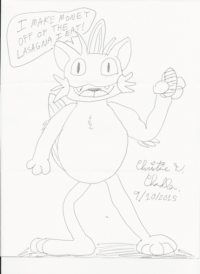 "I make money off of the lasagna I eat!"

Yet another fan got a picture of Silvana and Magi-Chan being cute together: 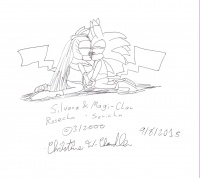 Sonichu seems to be stressed, possibly because Chris drew this the week of his conviction. 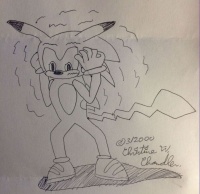 Sonichu, Inos, and an original character. 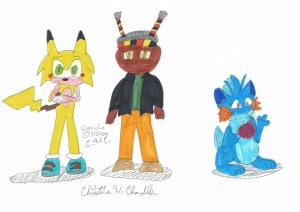