So the consensus seems to be that We should have a main namespace article for Asperchu. I tweaked my Alec Benson Leary article a bit, and now here we are. I hope it doesn't suck too bad.--Beat 17:27, 11 January 2010 (UTC)

While transcripts are all well and good, would it be possible to but the mp3 links back onto the pages? Isarko 06:16, 10 February 2010 (UTC) 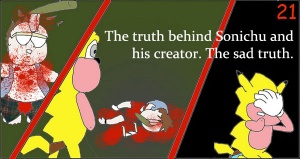 Is now the subject of 9 phone calls, loads of e-mails (most recently one leaked to the community portal). He's also the first example of the very subtle sort of trolling, later used to great effect by Jackie.

Anyone else notice that there were new Asperchu comics posted only a few days ago?

Has anyone ever noticed

During several automated bot runs the following external link was found to be unavailable. Please check if the link is in fact down and fix or remove it in that case!