It has been about a month since Chris recognised that Carrie et al are a ween, and Noah does not seem to have had any significant effect on Chris. Even Sarah and Steve or Sockness, whose interactions have been rather limited for the most part, have got more responses from Chris than Noah. Does the CWCki need a page for him, or can we leave him for the dogs at the Farms to tear at? ChanOfTartary (talk) 01:15, 10 August 2019 (UTC)

To add onto this some of the info in this article is now outdated and incorrect. https://twitter.com/skytreadismybae/status/1160142687502135296?s=21 I think this is the Internet detective who came to the conclusion in the first place and since he admits he was wrong I think it’s time to scrap this article for relevance and lack of real information. Duff101 (talk) 15:06, 10 August 2019 (UTC)

They were acknowledged by Chris and still seem to be active, no shit to minor after all. UPDATE: Looks like they accidentally name dropped themselves on reddit. Homsar (talk) 15:49, 10 August 2019 (UTC)

Bumping this discussion. I agree with ChanOfTartary and Duff101. MWK really hasn't done much to warrant an entire article - there's a lot of text covering his enabling attempts but the only notable interaction he's had with Chris is get him to think Ed Bighead is his ally. I think this article would fit better as a summary in Other enablers of Chris's delusions, jettisoning the parts Chris didn't react to. Hurtful Truth Level (talk) 01:22, 12 February 2020 (UTC)

I’ve been meaning to post this for a while but kept forgetting. But I know someone who’s on the Arbitarch server and they saw that MWK was in it and it showed more ideas they planted into his head. They screen capped them all and sent it to me, I have one uploaded now but I keep getting 413’s when I try to upload the rest. Once I can get them upload them I’ll post them here.

EDIT: Here they are. The Tweets made were around the time they also convinced him that Moonman was real via Local58 and the chats occurred on January 25th. From what my friend told me the others in the server tried to kick them out and Chris came on and said that what they told him was true. From what I've heard they're still on the server but nothing noteworthy has happened there since.Homsar (talk) 02:03, 12 February 2020 (UTC) 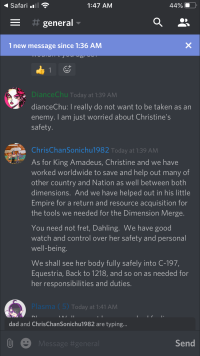 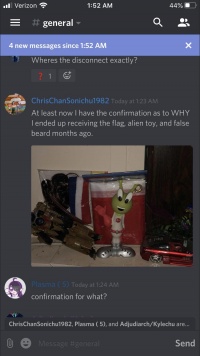 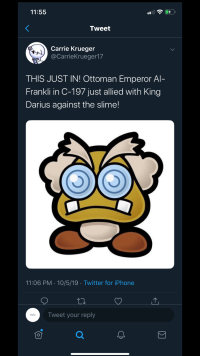 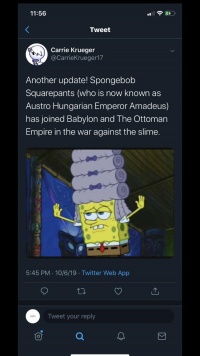 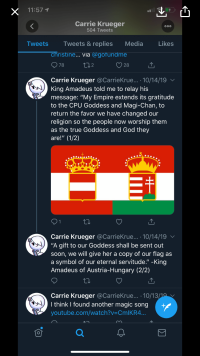 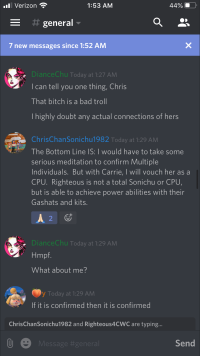 Moonman was originally a McDonald's advert for their late-night offerings. Because his crescent head looks like a Klansman's helmet, the internet has re-dubbed his commercials with Microsoft Sam rapping about killing niggos. (This is also probably why MWK associated him with the former South African president: Idea Guy-level edginess.) As to this strange blend of cartoons and random historical names being thrown about, Chris has not accepted them as TRUE and HONEST in the same way that Jakoba had got into Sonichu 14. Even MLP G5 got some trading cards and acknowledgement as existing in another dimension. For MWK, Chris shrugged and said yes about Darius the Mede and went on his way with nothing of consequence changing. This is a persistent troll, but not a competent one. ChanOfTartary (talk) 16:02, 12 February 2020 (UTC)

Read through this article, and it seems the only thing to support the dox was a Reddit post by the Knights explicitly naming that person. Which is highly suspect - why would anyone dox themselves like that? I think it's more likely the Knights just threw out a name to throw people off their trail. So I've removed the dox. Hurtful Truth Level (talk) 14:19, 18 October 2019 (UTC)

Until more substantial evidence appears, as Chris revealing the Knights' true identity, a Sockness-style self-doxxing too detailed and blatant to deny or something appearing in the Lunatics who attack an autist thread on KF, I concur. It is not our place to speculate, but to report when we have sources. This is not the first time we have had an incorrect identity attached to the Knights. ChanOfTartary (talk) 02:57, 19 October 2019 (UTC)