Q: How do you know what's going on in the comic? 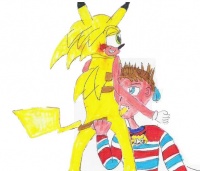 A: I only applied for the narrator gig because the old narrator (a man among men) was so damn good at it, and I couldn't bear the thought of the Audiobooks coming to an end. So basically, I wanted to make sure the new Audiobooks were done the way he would do them. That means describing everything that goes on, no matter how stupid and nonsensical it may seem. The genius of the old narrator was that he played it totally straight, reading Chris's horrible dialogue word-for-misspelled-word, and acting like it's perfectly reasonable for an ancient Cherokee to have blue eyes and wear Romanesque garb.

With that in mind, the only challenge is figuring out what the hell is going on. It'd be kind of funny to break character and go "You know what, I have no idea what's happening here." But that'd get old very quickly. So if I'm really stumped, I just guess, confident that no one else can decipher the artwork either. The part in Sonichu 3 where Bubbles saves her mother with an Ice Beam, I'm only assuming whatever I said in the Audiobook version. We only know the Swampert was in danger, and Bubbles used an Ice Beam or Freeze Ray or some shit to save her. The only one who can really dispute my script is Chris himself, and as the Videobooks demonstrated, even he barely knows what's going on.

Usually, I can make an educated guess. As bad as Chris's artwork is, he makes a token effort to include whatever's supposed to be there to communicate the action. If Sonichu punches Mary Lee Walsh in the ass, he'll draw Sonichu's arm and some purple thing that's supposed to be Mary's dress, and maybe the caption "*ASSRAMMER ATTACK*", and I've learned to pick up on those visual cues. I'm guessing the old narrator used the same trick, because I don't see how else you could do it. If it's vague enough, I just go for whatever's funnier, like assuming that when a bad guy gets shocked it kills him.

At one point I actually e-mailed Chris for clarification. This was for Sonichu's homophobic rant in Sonichu 9, where he hits the wall of his garage and causes a shelf to fall. At the time, everyone was confused about what was on the shelf. I had a pretty good guess, but I decided to check with the man himself. Chris confirmed that it was just a couple of potted plants and a bottle of detergent, but around that time he was getting pretty bitchy towards the Audiobooks, so I went with my original decision to call it a bottle of anal lubricant.

Later on in the same story, Chris posted that battle between Bionic and Naitsirhc, where Bionic does something with a wrench (?) and Naitsirhc shits himself. I e-mailed Chris again to find out what the hell Bionic was doing, and also to find out how Naitsirhc could project a stream of shit through his pants. This was the day I found out Chris had blocked me on his e-mail.

Other than that, I just make it up when I'm really confused. Usually, though, there's enough clues to come up with something.

Now that I've got the bulk of the templates in Category:Templates sorted into subcategories, I can start organizing priorities a little better.

Some of the templates meet these criteria, while others only go halfway. I love the Template:Deletion message, but why doesn't it have a picture of the moon? It should. In any case, Template:Mbox might be helpful with this project, if I can get it to work.

These are templates I think may need to be nominated for deletion.