Sonichu #3 is the fourth issue of the series.

This issue introduces the Chaotic Combo, the five Electric Hedgehogs who basically exist to be Sonichu and Rosechu's friends and would form the fixed ensemble cast of the series going forwards. Rather than just have more rainbow beams hit unsuspecting Pokémon, Chris gets it in his head that baby Sonichus would be cute and decides to spend all of Episode 10 chronicling the entire life stories of five different characters. Each of the Combo's origin stories are virtually identical, as they are created as eggs from the magical rainbow and then deposited umpteen years in the past, where they're adopted by people or Pokémon who cultivate their abilities until they evolve. Making matters worse, Chris's concept for baby Sonichus and Rosechus is that they are unable to speak beyond saying "Sonee?" or "Rosey!", thereby guaranteeing page upon page with almost no intelligible dialogue. The troll community almost unanimously agrees that "Sonichu Babies" is one of the most aggravating pieces of Sonichu material made, and is the most likely to result in some kind of violence, due to the irrational anger it can and has caused. This issue took Chris seven months to complete; even he seems to have struggled to get through it.

In Episode 11, the Chaotic Combo is united for the first time by Sonichu, whereupon they dogpile Black Sonichu in a six-on-one beatdown. 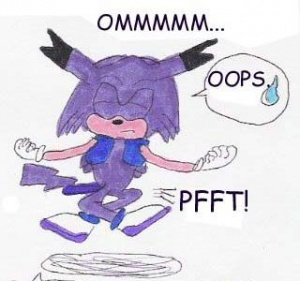 It is explained that the rainbow of Chaos Energy that emerged from Sonichu's collision with Sonic created five eggs that landed in various areas within a few miles of CWCville. Christian Weston Chandler, the narrator, congratulates himself on this cute intro, and presents what Sonichu and Rosechu would have looked like if they had been born as Sonee and Rosey, which makes no sense because they first appeared fully-grown, having evolved from mature Pokémon.

Each of these eggs is shown hatching into a new baby Electric Hedgehog Pokémon. First, the green egg lands in the jungle and the hatchling is raised by a Venusaur and a Scyther, who teach him various survival skills. In time, Wild Sonichu develops his ability to inexplicably shoot vines from his arms, fly with his propeller-like tail (a skill he has never once used outside of this page), and camouflage himself into his surroundings.

The blue egg lands in the ocean, where it is recovered by a Swampert who takes it to the beach to hatch. The resulting Rosey loves to play in the water with her surrogate mother, until one day a Wailord inexplicably drops a boulder onto Swampert, causing it to sink into the depths. Terrified, the Rosey tries to save Swampert, but is too weak; however, its effort causes it to evolve, and Bubbles Rosechu is able to save her. Bubbles is so happy to reveal her origin that she decides to make a seashell necklace (which we never see).

The white egg somehow ends up at the doorstep of a convent, where it is discovered by several nuns who live there. The nuns raise the white Rosey, who studies the Roman Catholic faith alongside them. They also inexplicably keep her eggshell around, presumably as a memento or proof of a miracle. She evolves into Angelica Rosechu in her sleep one night, and for no apparent reason Christian Chandler is outside her bedroom window with shoes and a scrunchie for her to wear in her new form, even though none of the other members of the Combo received any such gifts, and she's still naked.

The red egg crashes into Nabe's dojo-shin, immediately hatching into a Sonee. Inspired by his surroundings, the Sonee tries to fight. Mypoe accepts the Sonee's challenge, and for no apparent reason she rips the Sonee's tail off. This trauma causes the Sonee to evolve into Punchy Sonichu. Punchy uses his impressive strength to Sky Uppercut Mypoe straight through the roof, presumably killing her. Impressed by the apparent murder of his daughter, Nabe offers to teach Punchy the ways of the martial arts, at which Punchy excels.

The purple egg hatches inside a mysterious mountain, where it seems to be alone. However, the Sonee is telepathically contacted by Mewtwo from a nearby city. Mewtwo has noticed the Sonee's telepathic powers and wishes to mentor him in the use of those abilities. In this way, the Sonee learns to master his abilities and vicariously learns about the outside world and Jackie Chan movies. One day during his routine meditation he evolves into Magi-Chan Sonichu. Then he farts. Mewtwo congratulates Magi-Chan and sends him off to find his destiny, promising that they will meet in person sometime in the future.

The stories are, unsurprisingly, dull and clichéd. Three of the five stories follow the same pattern: Egg is found by foster parents and hatches, foster parents teach child notionally valuable skills as the child struggles to accomplish them, and child evolves after an unspecified time and has suddenly mastered the aforementioned skills. Bubbles's story is similar, without the "valuable skills" part, making her useless. Punchy's story is the only one that deviates from the formula, and therefore the only one that's remotely interesting. Indeed, the pages each story occupies are nearly identical in layout. How and why the eggs ended up where they did has not been addressed by Chris to this day; the only options are either extreme good fortune (any Rosey/Sonee but Bubbles who ended up the ocean, for instance, would have drowned) or a completely unexplained intervening force. Also, Punchy has slated eyes. This, along with knowing martial-arts, makes him look like a caricature of Asian people.

Join MySpace, the premier online community for dudes of all teenages, slow-in-the-minds, and cutters! Chris already has, and he needs more friends. At this time, Sonichu is his only friend =(

Episode 11: The Chaotic Combo in "When Hedgehogs Meet" 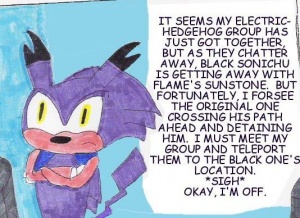 When Hedgehogs Meet is probably intended to be a grandiose title, but, because hedgehogs are inherently silly animals, any such drama falls flat. The story is introduced by Flame the Sunbird, who explains the significance of the Legendary Master Sunstone, a mystical artifact that must remain safe on his island to prevent people from growing or losing extra appendages.

Just then Black Sonichu jumps out of a helicopter on orders from Naitsirhc to steal the very same stone Flame was just telling us about. The black fiend, being larger and stronger than Flame, easily overpowers him and, having a simplistic notion of justice, takes the Sunstone away on his hoverboard. Flame goes after him and attempts to subdue Black Sonichu with Drill Peck (despite explicitly confirming he is not a Pokémon immediately before this scene), but the devious darkie uses Double Team to confuse his pursuer.

Amid this commotion, Black Sonichu's hoverboard somehow creates a wave that washes over the beach as he reaches the mainland, thoroughly drenching Bubbles, who was sunbathing on the shore (despite her total inability to tan). Bubbles is furious at getting wet (despite being a Water-type who lives in the ocean). With little regard for others, Blachu speeds through the jungle, knocking Wild off-balance as he swings through the trees. Finally, in another part of the wilderness, Punchy is practicing his punches out in the forest, when his spiky knuckles get caught on the bottom of the hoverboard and is dragged along for the ride.

Near her convent, Angelica, who has no botanical powers whatsoever, is somehow causing flowers to grow in a pattern that reads "HOPE & PEACE". Just then Black Sonichu and Punchy zoom by, with Punchy hitting a tree and falling from the hoverboard. While Angelica checks on Punchy, Bubbles, Wild, and Flame catch up. Each of the hedgehogs is delighted to meet others of their kind, and make introductions. From a distance, Magi-Chan observes this and realizes the others are forgetting about Blachu, so he zaps off to remind them.

Meanwhile, Sonichu finally bothers to show up on page 23 of his own damn comic, having somehow already concluded that a black guy is out stealing things. Just before Blachu can reach the safety of Team Rocket's headquarters, Sonichu intercepts him. After a brief scuffle, Sonichu finds he has reinforcements - Wild, Bubbles, Angelica, Punchy, Flame, and Magi-Chan have all teleported in. Black Sonichu remains defiant, perhaps due to unconscionable amounts of crack cocaine and PCP he has ingested. While Flame falls into a bush and exits the fight, the hedgehogs huddle up and Sonichu comes up with a brilliant strategy:

The Chaotic Combo then employs this meticulous and brilliant plan of attacking their opponent while not letting him hit them, but little strategy is needed when it's six against one, and Black Sonichu is easily beaten by superior numbers.

It's better than Sonichu Babies, but that doesn't make it good. Their strategy isn't so much a strategy as it is, "attacking really quickly".

An advertisement for an escort/prostitution service specifically catered to the needs of welfare-collecting, homebound, 20-something male virgins. FREE! Humorously, the phone number advertised (1-800-RITE-NOW) does exist in real life, connecting to a company who scam elderly people by selling fake insurance; they have since ran out of free monkeys.

One year and ten months have now passed since Christian Weston Chandler began his Love Quest, but he has still been unable to locate "an 18-23-year-old, boyfriend free, caring, smoke-free, non-alcoholic, white girl to build a relationship from the ground-up with." We find Chris at M-C-Dville in the region of Mal-Wart, drawing comics and listening to music on his Nintendo DS and generally not purchasing food or otherwise justifying his presence there. He blames his inadequacy on all men everywhere (except for himself and his father), who has taken all of the pretty girls for themselves. In happier thoughts, Chris is glad to have paid for earned a pair of hair clips shaped like wings at a recent anime convention, although this prize was intended for twelve-year-old girls.

Just then, the McDuo of M-C-Dville, B-Manajerk and Merried Seinor Comic, arrive. They have been notified by the Jerkhief of Fa-Square that Christian is on a quest to find true love, which for no given reason is forbidden in Mal-Wart. Backed up by an army of the Jerkhief's Mecha-Jerkops, they accuse Chris of solicitation. Chris makes a boring speech and refuses to back down, and the Mecha-Jerkops advance upon him. However, just then Darkbind Sonichu makes his debut, slicing the Mecha-Jerkops into pieces with his sword. Darkbind acknowledges his loyalty to Chris due to him being both the mayor of CWCville and his creator.

Chris summons the anchuent powers of his medallion to become Chris-Chan Sonichu, and somehow the anime wings become real wings on his head, making him into Super Chris-Chan Sonichu. While Darkbind dismembers the cybernetic Merried Seinor Comic, Chris takes to the air to combat B-Manajerk with Aerial Ace, Double Team, and Thunderbolt. With his trusty Pixelblocks, Chris-Chan creates a decoy of himself, which B-Manajerk mistakes for the real thing and attacks with his ax. The broken pieces of Pixelblocks become lodged his skin, diverting him while Chris sneaks up from behind with a Sky Uppercut. How Chris successfully delivered an uppercut from behind is not apparent. With the villains defeated, Darkbind hurries to leave before Chris can revert to human form and deliver his big speech:

This simple request is refused by a voice over the intercom, and Chris finds himself beset by the ruler of the Mal-Wart Region, the dreaded W-M-Manajerk.

Yes, B-Manajerk means Black Manajerk. Yes, Married Senior Comic is an actual name Chris just made. And yes, it is a two-parter.

As with Sonichu #2, early editions feature the personal army request page, while the most recent CWCipedia version features Sonichu Adventure.

For Truth and Honesty, see the archived CWCipedia page on the Sonichu Comic Collection