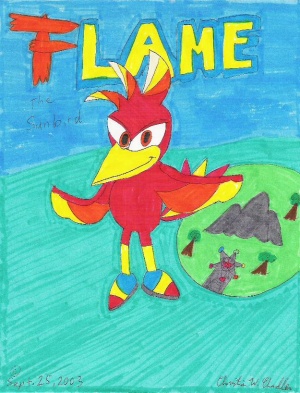 Flame or Kazooie? YOU DECIDE! 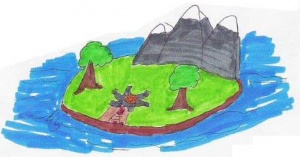 Flame the Sunbird is a large red male sunbird who lives on an island and is tasked with the protection of the Legendary Master Sunstone.

Flame is a blatant ripoff of Kazooie from the Banjo-Kazooie series (whom Chris doesn't seem to realise is female), and possibly also Bean the Dynamite from the arcade game Sonic the Fighters. His job, meanwhile, is stolen from Knuckles the Echidna. Chris has stated that "Flame was NEVER taken from Kazooie; if anything, he is MORE similar to Knuckles, but with a Sunbird Form."[1]

Flame's role is to look after the Legendary Master Sunstone; however, it is stolen by Blake acting under the orders of Giovanni. Consider that his entire purpose in life is to protect an immensely powerful jewel, only to have it stolen by some ripoff of a ripoff in an eyeblink mere moments after being introduced. It is later returned to its correct place when the Chaotic Combo and Sonichu defeat Blake. There is no indication that security on the Sunstone has been strengthened since, despite its enormous power and the ease with which Blake stole it.

Flame also appears in the Episode 18 Prologue. When the Chaotic Combo are celebrating their nineteenth birthday, Flame is in attendance. He has not been seen since, even in the massive Sonichu #10 everybody-shows-up-again brawl.

On 1 September 2015, Chris posted an illustration of an avian character who bears similar resemblances to Flame, on the Duck Hunt community, along with a message requesting the Nintendo Company to "Bring on More Zapper classics". Even though clarification wasn't given on who the character illustrated was, it does not bear resemblance to any official artwork for the game and can only be assumed to represent Flame the Sunbird.

Flame has yet to get a TSSSF card. 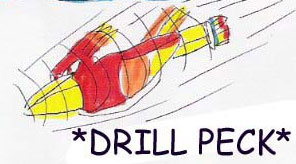 Flame, who is not a Pokémon, using the Pokémon attack Drill Peck.

In his introduction, Flame explicitly states that he is not a Pokémon, nor is he even related to one. A few pages later, he uses the Pokémon move Drill Peck when chasing Blake as he escapes on his hoverboard. Naturally, no explanation is given.