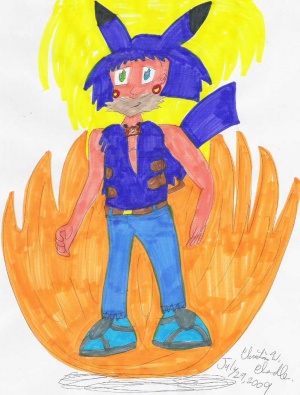 Collosal Chris-Chan [sic] is yet another Mary Sue form of Chris in the Sonichu comic. He, like Ultra Sonichu, is the result of "Chaotic Crystal Power" after all seven of the Chaotic Crystals have assembled. Collosal Chan is surprisingly (or unsurprisingly, given his creator's reputation) the size of regular Chris-Chan, indicating that Chris just picked whatever alliterative adjective he thought sounded awesome as a naming convention. (A pity that he couldn't actually spell "colossal" correctly.) 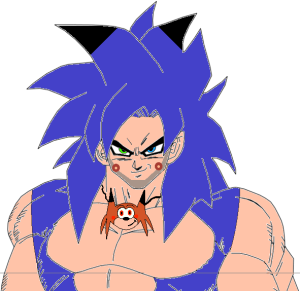 The concept is that Collosal Chan is some kind of half-way point between regular Chris and Chris-Chan Sonichu. His medallion also changes from yellow to orange, just like Ultra Sonichu. Despite the name, "Collosal" Chris-Chan appears to be exactly the same size he always is.

However, in Chris's stunted ability, this basically manifests itself as Chris-Chan in a ratty vest, stupid hat, and with a hobo beard. Why Chris would want to be a half-version of his actual super form doesn't make a bit of sense: how does having elements of the weaker Chris's body improve over just being a magic, omnipotent hedgehog? So far there is no reason to believe that the things Chris does as Collosal Chan couldn't also have been done by Chris-Chan Sonichu.

It's believed that the design is heavily influenced by Goku's Super Saiyan 4 appearance in Dragon Ball GT, which mixes animal traits to an otherwise humanoid appearance. In Goku's case, it's an Oozaru, or Great Ape; in Chris's case, it's an Electric Hedgehog Pokémon. Fan art adapting this design to Goku's appearance in the series can be seen in this section.

Collosal Chris-Chan makes his first appearance in Sonichu #10. Using the power of the Chaotic Crystals, he transforms into what is essentially a glorified super form. For some reason, the Anime Wings won't cut it this time around, like they were used more than once.

The first thing he does is rescue Crystal from the Dark Mirror Hole. Arriving in Minnesota, he jacks into the HEXBox of Alec Benson Leary, enters its computer world, somehow deletes everything connected to the Asperpedia, and blows up the HEXBox. He later helps Chris's version of the Asperchu characters in their fight against Metal Asperchu before travelling back to CWCville to finally confront Mary Lee Walsh, whom he defeats promptly and unceremoniously.

This form later made an appearance in Sonichu #11. In that story, Chris recalls the time when he shifted his gender identity (which, in-universe, happens very shortly after his final defeat of Mary Lee Walsh), which is showcased in the comic with a dedicated Sailor Moon-like transformation sequence. Afterward, he reverts to his original, though now feminine, Chris-chan Sonichu form. One still image from this issue, showing Chris's post-transition appearance as part of the design, exists in the form of a trading card. 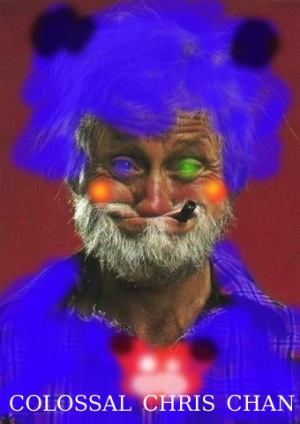 Collosal Chan has strange, almost godlike powers, the most basic of which are flight and telepathy. On top of that, he is shown to enter the Dark Mirror Hole effortlessly and retrieve Crystal from it, connect into a computer's USB port with his finger, create a version of himself to destroy everything, and create a Lightning Bomb that allows for controlled destruction by way of force fields.

He also has some basic combat abilities, most of them already available to regular, pussy human Chris anyway. During his final fight with Mary, Chris is capable of creating solid weapons presumably out of pure electricity that greatly resemble Kratos's blades from the video game God of War.

While logically, Collosal Chan has access to all the powers of his previous forms and any other Sonichu or Rosechu, these abilities have yet to be utilized. Collosal Chan can reasonably be expected to possess any power Chris considers necessary to save the day.