Inos (born 1929/30) is a human inhabitant of CWCville, first appearing in Sonichu #10. Possibly in a response to demands from fans for a more diverse lineup, Chris chose to depict this particular token character as a homeless, addled, drug-pushing, diseased junkie with filthy dreadlocks styled like a Sonichu's ears.

Talking to Sonichu with a vaguely Jamaican accent, he uses dottled wordplay to explain that he is a seventy-eight-year-old "Jamaican Veteran" (of what war is never mentioned, but considering his age, it could be the Korean War) and professional bum who has suffered from a cold for five years. Chris stops short of having him sing "Buffalo Soldier" and join a bobsled team. After Inos offers him some dige, Sonichu recoils in disgust, lectures the half-dead man on his drug abuse, and has him arrested, cautioned, and admitted against his will into one of CWCville's soup hotels. His deadly wares are also appropriated and sent to the tobacky rocket.

The character makes a poorly-hidden reference to Sonichu in the dialogue of the above picture: "Sonichu, Eclectic Hedgehog Digimon." The "Sonichu" part comes from Inos's name in reverse (Soni) combined with the "chu" of "wha' chu". 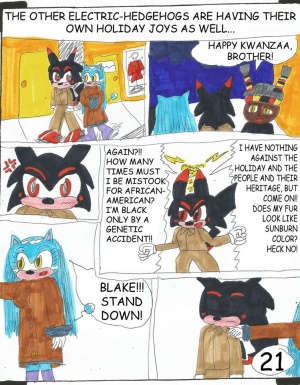 Inos later appears in Sonichu #11, unintentionally causing Blake much distress by assuming he's a fellow brother and wishing him a happy Kwanzaa.

The youngest of three siblings, Inos was neglected and performed poorly in school, falling in with the wrong crowd. It can be assumed that he was selected for military service due to his delinquency. Since he returned home from the war, Inos has never been able to hold down a job and has spent much of his life living on the street. He currently resides in the soup hotel of a CWCville slum with a few friends. Although he lives in the ghetto, he is not a victim of gang violence or "Nigga Moments".[1]

Chris revealed in a video that Inos is actually based on a troll creation made to mess with Chris using international copyright law. The creation is known as "Soni-chew, the eclectic heeedge. Hog. Poké! Mon of London, England," or at the least, that's what Chris calls it. At this point it's not clear how much of the Inos's appearance is based on the "original" character, but his dialogue is inspired by Soni-chew's character description.

After Chris' arrest for incest, the original troll who indirectly inspired Inos came clean and said he was meant to be a representation of "Mr. Blockley", the fictional creator of "Soni-Chew, Eclectic Hedgehog Digimon".[2]