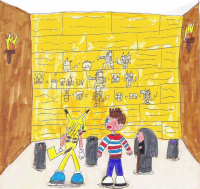 Sonichu, Chris and the cavekeeper are shocked by the Prophecy's idiocy. 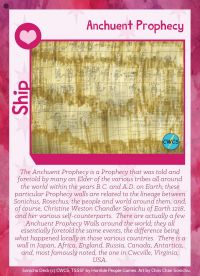 As a TSSSF card featuring lore written by the Idea Guys.

The Anchuent Prophecy (pronounced [ˈeɪnʃuɛnt], "AIN-shoo-ent"[3]) of the Cherokian Clan is one of the central plot points of the entire Sonichu series, often being cited to explain many fantastical developments in the story. Primarily, the prophecy explains why Chris and several other human beings in the comic can transform into furries. While the prophecy originally concerned Chris, Sarah, and Wes's relationship, as the series progressed all non-Chris details were essentially ignored or forgotten. The prophecy is also important because it renders Sonichu (the supposed main character of the comic) even more pointless, firmly establishing him as simply the "electric creature", whose only purpose is to help Chris unlock superpowers for himself. Well, more superpowers, as he was already capable of using Satanic Voodoo Powers.

Long thought to be a typo, its consistency has eventually led to the realization that it's probably supposed to be a "Pikachu" pun. Why or how the Cherokee would make a pun on the English word "ancient" and the Japanese word "chu" (onomatopoeia for "squeak") is unclear. 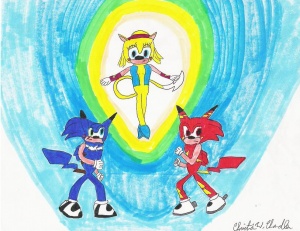 The prophecy was brought to light when Sonichu happened upon the Destiny Cave, prompting the old man dwelling there to remark that Sonichu was "the creature of the prophecy." Learning that it was his destiny to enter the cave and learn of the prophecy, Chris accompanied Sonichu back to the cave, where he learned that Sonichu had inadvertently set off events releasing Count Graduon, an evil spirit locked away for centuries by the Cherokee and Wasabi clans.

The prophecy, according to the keeper of the Destiny Cave, is as follows:

Yes, that's right: the act of Chris and Sonichu showing up at the cave to hear about the prophecy in the first place is what allows the evil to escape. If they had just sealed up the damn cave there wouldn't have been any problem, but that would also mean Chris wouldn't gain the ability to turn into a furry.

Recognizing that the ancient evil could only be defeated by powers at his command, Chris fulfilled his part of the prophecy by placing his Sonichu medallion on the pedestal, allowing the old man to say the incantation that would activate the medallion as well as the Fireshock Pendant and Lightning Bracelets. These three totems would now give their rightful bearers the power to become electric hedgehogs like Sonichu. The reincarnation of the Cherokian king, Christian, could now become Chris-Chan Sonichu. The reincarnation of his queen, Sarah Hammer, received the Lightning Bracelets and became Saramah Rosechu. The leader of the Wasabi Clan, who had been Cherokian leader's romantic rival, was now Chris's rival Wes Iseli, and so he accepted the Fireshock Pendant and became Wes-Li Sonichu.

Initially the three prophecized electric creatures were unaware of one another's human identities, until Wes-Li attacked Chris-Chan out of spite for issues both in real life (their mutual interest in Sarah Hammer's affections) and the fictitious ancient past (the ownership of the Cherokian crown). The prophecy would go on to accurately describe how Saramah would have to bring peace to Wes-Li and Chris-Chan so that they could present a united front against Graduon.

It should be noted that they never actually did stop Graduon at all. The three of them teamed up temporarily to defeat a stone golem under Graduon's command, whilst Graduon himself left with Mary Lee Walsh to start running the Private Villa of Corrupted Citizens. Sarah ran off with William Spicer and got married,[4] while Wes actually ended up joining Graduon's evil organization,[5] though there is no explanation of his reasons for defection to the enemy at all. Both these things came to pass because Sarah got married in real life and Chris developed an interest in a new, unfortunate girl, and since Sarah being out of the picture left Wes obsolete, he was simply made into a generic villain. Thus, in spite of the prophecy, Chris is left alone to fight Graduon and an army of his followers, essentially making the other two completely useless and the prophecy a failure.

Crystalina Rosechu, the fourth electric creature of the prophecy.

When Chris was ambushed by the W-M-Manajerk at M-C-D-Ville in the region of Mal-Wart, he received another vision of his Cherokian ancestor advising him to combine the powers of Chris-Chan Sonichu with the Heart Torch he constructed from Pixelblocks. In this way Chris would be able to summon his dream sibling, who could assist him in the battle. Following his ancestor's instructions, Chris used Heart-Torch Glow to manifest his identical twin sister, Crystal and the Rosechu medallion she could use to become Crystalina Rosechu. Joining forces as Chris-Chan Pure, they defeated the W-M-Manajerk and made the city safe again.

Fine print of the prophecy: Reldnahc, the ultimate dark being

Reldnahc Ha-Taque, the fifth electric creature of the prophecy.

This additional detail in the prophecy which was retconned in later went unnoticed by Christian, much to his dismay when he learned that his mishap in Graduon's Dark Mirror Hole allowed Naitsirhc Giovanni to transform into Reldnahc Notsew Naitsirhc, one of his deadliest enemies. Once again this is an example of the prophecy fucking over more people than it helped, since if Reldnahc really was the "ultimate dark being", then that logically makes him an even bigger threat than Graduon, who the prophecy was made to defeat in the first place. Also note that the prophecy does not actually guarantee that Reldnahc would be defeated at all, even though he eventually was in Sonichu #10. It's only thanks to narrative magic that Chris ever actually managed to defeat all the numerous enemies that the prophecy actually created, that wouldn't have terrorized the world in the first place if he had just left well enough alone.

Also, the original prophecy was spoken aloud to Chris by the keeper of the Destiny Cave. How there could be "fine print" at all when it was spoken and not written on paper is never explained. The only sensible conclusion is that the keeper either mumbled that part under his breath or just decided to not tell Chris that part at all. How Reldnahc actually knows about that detail or the prophecy either is also a complete mystery.

Completely unexplained part of the prophecy: Some brown guy

Enter IBAChandler. He's a Sonichu character based on Liquid Chris who appeared in Sonichu #9. He works for the PVCC and fought in the Battle of CWCville. He showed up in Electric Hedgehog form for about two pages and was curb stomped by Sonichu in a matter of minutes. When he was defeated, he then suddenly transformed into a human, much like Chris or the other transforming Sonichus do upon being defeated. Then, just as Sonichu calls in an ambulance to have him taken to hospital, he is grabbed by the tentacles of a gang of Devil Trolls and carried off to safety. Apparently Devil Trolls are tiny goblin-like demonic entities, some of which can fly. The paramedics speculate that he was in alliance with them. So, who is this guy? Why does he have such powers? Why is he working for PVCC? Why is he allied with Devil Trolls? What's his story? What's his motive? How does he factor into the prophecy? Is he human? Is he the devil? Why does he care about stealing Chris's identity? Why did he try to fight Sonichu? NONE of these questions are answered. Are you surprised?

The prophecy becomes (even more) irrelevant

In Sonichu #10, Chris's medallion is taken from him by Beel, mirroring the real-life interception of the medallion by trolls. He then "learns" that the source of his power comes not from the medallion but from his Amnyfest Ring. The ring is, of course, never mentioned in the prophecy, and indeed it is specified that he requires the medallion. The reader is expected to digest all this information without any cognitive dissonance.