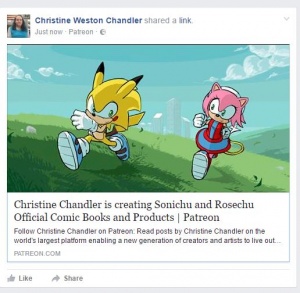 On 2 August 2021, Patreon suspended Chris in light of the Incest leaks.[4]

Prior to revamping his rewards, he had been receiving $28 per month from 4 patrons[5], with two of them subscribing to the $10 tier.[6] 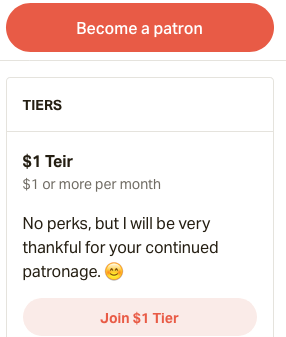 Chris's Patreon started out small, but as time went on, weens threw more and more money at him, not realizing he spends it on frivolities and often fails to send out the rewards promised to patrons, claiming he ran out of money. Patron support continued even during the first few months of the Idea Guy saga, when Chris was too distracted with being trolled to work on the comic. By January 2018, in spite of it having been a full month since Chris's last comic update, Chris's patrons saw fit to award him with his second-highest revenue amount in his time on Patreon, netting him $652 from 24 people[7]. Beginning in April 2018, however, his luck would turn; Chris's backers sharply reduced their pledge amounts, presumably due to Chris's failure to put out new comic pages. On 2 May, Chris whined on social media about it:

At that point, he had gone for 95 days without updating the comic. Even with the release of Sonichu 12-9 and Sonichu 13 (then known as Sonichu 16), Chris's pledges continued to hemorrhage as he fails to release his contents regularly. To date, his longest dearth of content has been 838 days, lasting from October 2019 onwards.

During February 2019, after getting free advertising from a patron's unboxing video, which garnered over 27,000 views during that month, Chris's Patreon rebounded with over a dozen new patrons pledging several hundred dollars, most hoping to receive physical book rewards. However, those patrons were naive, as Chris simply didn't bother to mail out the comics, leading to complaints and donors eventually pulling their support.

October '17 - Two of Chris's patrons report not receiving their books for the month.[10]

Luniara, also known as Mellanie Chafe (a commentator/friend on Chris's Facebook since 2015), also complained.[11][12][13] For some reason, she remained a patron, even though Chris failed to answer her concerns.

Nevertheless, she was still a loyal patron. By May 2018, however, it was found that she was no longer a patron nor following Chris, possibly as a result of Chris getting angry at her over an unrelated matter and blocking her account over Facebook.[14]

November '17 - A patron left several messages on various posts,[15] gradually running out of patience and then cancelling his pledge:

September '19 - The Dimensional Merge saga continues to escalate tensions between Chris and the patrons.

The banner for his account is plagiarized from another person's fanart of Sonichu and Rosechu.[16]