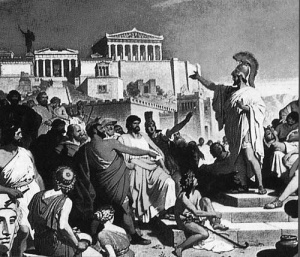 What Chris thinks he's doing when he gives a speech.

Whenever Chris wants to make an argument regarding his opinions or his childlike mindset, one way he’ll attempt to move people is through orating his reasoning onto them. Since Chris lacks some of the basic skills needed to make an effective speech, rarely ever plans out anything he makes, has serious communication problems, and never does research, his speeches always turn out lackluster at best and horrifyingly naive at worst.

Chris as a public speaker

To put it delicately, Chris simply is incompetent at giving a comprehensive speech that people can follow. Some reasons for this include:

Public speakers are supposed to make their ideas clear so their audience can understand their point of view. yet Chris can't give a speech to save his life is because he poorly communicates with other people. Chris has the inability to form complete sentences, especially when he does not speak before thinking. Whenever he does in fact "succeed" in communicating a complete thought, most of the time, he only seems to express it as a formula full of variables that he can plug and chug different words and phrases into. Because of this, his speeches always involve many repetitive phrases. Repetition can be used as an effective tool to make a person's speeches clearer, but it is usually done in a way that puts emphasis on the main idea of the entire speech, such as a powerful statement the orator might make. When Chris uses repetition in his speeches, it's usually because he can't think of anything else to say. He almost always seems to get it right whenever his speech involves rage or wanting someone to die, since all Chris can think about in those speeches is getting his goal accomplished as soon as possible.

In many of his speeches, Chris will also use very fancy sounding words to make himself look more intelligent than he actually is. Chris probably thinks that by using obscure words, or by making up phrases composed of existing words and affixes, his speeches mean more than they actually do and people will think he knows what he's talking about. In the end, however, this ultimately backfires and makes him look even more like an idiot than he's intended, and if the person listening to the speech isn't already familiar with Chris' strange vocabulary, they'll be completely lost.

Despite wanting to change the world, Chris rarely ever makes a change for himself, whether good or bad. One of the most important aspects of a public speaker is their willingness to not only change the ways others think but to also change themselves. Therefore, an effective speaker would always be aware of his/her good and bad qualities. Instead, Chris, who sees himself as a godsend, never looks into his overall character. He tends to magnify some of his null and void good qualities and completely overlook a majority of his bad ones. The only times he mentions his bad qualities is whenever he feels he needs the pity of people more fortunate than him to make himself feel useful. Because of this complete lack of self-awareness, it is very hard to actually follow any type of advice Chris will give, given his inexperience in these same things.

Considering how an orator must know a lot about what they're trying to prove to their audience, one of the key aspects of a public speaker's job is to study the topic of their speech. Given how lazy Chris is, Chris is doomed to make incredulous speeches. Because of how little research Chris does to make a point, and having lived a very sheltered childhood, Chris seems to base his points on many logical fallacies, childlike beliefs, his past experiences, and baseless assumptions. Even when he does do research, he still somehow manages to make the speech to turn out factually incorrect. Whenever he does research, his preferred source seems to be Wikipedia[1], which many people do not recommend as a secondary source, given how anyone can edit its articles. Even if Wikipedia itself was a credible source that could be used to make a strong argument, Chris will often cherry pick whatever proves his point the best, ignoring all of the other parts of the article.

Most importantly, for any public speaker, they need to be someone that can be trusted by the general public. Given how often Chris lies, it is no surprised that all of his credibility will be lost when he gives a speech of any kind, especially when everyone who at least knows who Chris is, is already aware of this habit. 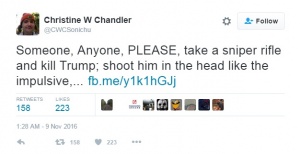 One reason why Chris is hated by many is that he spews spiteful, hate-filled, sometimes discriminatory comments at people he feels are his enemies. The extent of what Chris might say to his offenders is ultimately unpredictable. Sometimes, Chris will only go off on a tangent on how much of a dirty troll his offenders are, and will rage, thinking that that will work as an effective way of changing their minds about pissing him off. Other times, Chris will absolutely despise a person's guts so much, that when he orates about their dastardly deeds, he will want the person in question to either suffer or be wiped off the face of the Earth entirely.

Chris, who thinks he knows everything and has control over people simply by making a speech, will sometimes command his audience to go out and do something to better themselves, or else they will have to face dire consequences. In the video, THAT IS MY HOUSE, he is in a childish rage, demanding all of the trolls to delete everything they found out about Chris' House off the internet, and even goes as far as threatening the law onto them. Also, during the Clyde Cash saga, Chris has made several attempts to blackmail Clyde a series of videos where he's threatening Clyde to stop trolling him. In some of these other videos, Chris tries to make Clyde look like a pathetic weakling and makes himself look like a Herculean chick-magnet, while he was threatened him to have a fight with him.[2]

Most Christorians already know that Chris is as stubborn as a mule. This means that regardless of what evidence you give to him that suggests he’s wrong, he’ll always try to find some kind of information out of thin air to further verify his beliefs. Whenever he gives a speech, often times he doesn't ever think about why other people might not agree with his opinions, or he won't think about the kind of people that might not benefit from his opinions.

If anyone dares make fun of Chris, or even disagrees with Chris on a certain topic, chances are Chris might not do any of the above, and will instead try to make a fool out of the enemy to look like he's, in general, a better person. This leads to hilariously unintentional results, as this reveals how much of a child he really is. This is typically done whenever Chris completely ignores the entire argument and has to rely on ad hominems to get across the notion that he's not a homo.

Chris' Autism Tutorial is a prime example of Chris failing to lecture a large group of people on a widespread mental disorder. In most of this video series, Chris fails to actually talk about Autism, its effects on one's cognitive functioning, how neurotypicals should treat people on the Autism Spectrum, and seldom gives good advice. When he isn't telling parents of autistic children to mainstream their kids and irrationally hating on a part of the spectrum, he is giving very confusing and convoluted speeches. Here are just a few of his speeches he gives in the video series.

In this speech, Chris doesn't seem to account for people who are much lower on the spectrum, and therefore can't socialize with others like he demands them to. He also doesn’t seem to grasp the idea that all autistic people develop differently, hence why it is called a “spectrum” in the first place. Because of this, despite being incompetent at socializing himself, he thinks that if he just acts as a role model and tells all autistic people to go out and just talk to people, their disorder will magically go away, and they will be able to obtain some china.

Due to his lack of research on Hans Aspergers' contribution to the understanding of autism, him twisting and cherrypicking what he did find out about Hans' research, and him failing to realize that Hans was autistic himself, Chris seems to view Hans as the culprit behind his and other autistics lack of appreciation from anyone, simply for naming a condition after himself and having it sounding like "Ass Burgers" in his childish mind, also failing to realize that Aspergers is only a part of the spectrum and not another name for it, and therefore takes great offense at it for no reason. 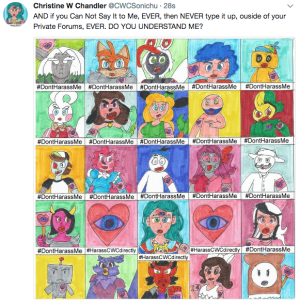 On 1 August, 2017, Chris made a post for National Girlfriend Day, where he gathered up all of the gal-pals he had made on Twitter. In this particular post, he tagged Planet Dolan voice actress and artist, DoopieDoOver, whose Twitter posts Chris replied to on a regular basis. Doopie, creeped out by Chris's possible labeling of her as a gal-pal, made it clear to Chris that she is a stranger to him and that he should back off. Despite this obvious message, Chris took it as meaning that Doopie won't befriend Chris because of her influence with the trolls, rather than because of him being a massive creep. Chris then came to the conclusion that Doopie wanted to stay away from him because his trolls were supposedly harassing her and the rest of the Planet Dolan crew. Chris, upset that the trolls were supposedly trolling his new friend, created the hashtag campaigns "#HarassCWCDirectly" and "#Don'tHarassMe" the next day to direct all of the trolls that were trolling Doopie to him, and even made a video scolding the trolls for harassing other people for their enjoyment. Because of Doopie eventually blocking him, Chris retired the hashtag on 4 August, 2017.

On 28 August, 2017, after being stressed out by his conversation with LadyOfTheCosmo, Chris, thinking he is no way responsible for the bad things that happen to him, made a post regarding how the trolls have recently made him "feel off". After making this post, he made a long-winded speech about how good should rule over the evil that is the trolls. He eventually followed the Twitter Hashtag #BlockTheTrolls. 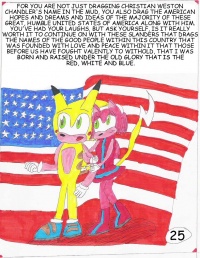 Apparently, drawing a pickle on a fictional female character is a form of treason.

At some point in the comics, many of the characters will give a speech regarding their opinions on the current situation. Other times, Chris will use these same comics to write speeches of his own. The comics turn out to be a very good source for learning about Chris' orating skills.

For example, towards the end of Episode 17 in Sonichu 8, Sonichu gives a speech about how Jason Kendrick Howell is not only triggering Chris by giving Rosechu a pickle, but how doing so somehow also drags both his and other United States citizens through the mud, even though Rosechu is not a political figure.