Chris Chan Update 9 October 2008 (officially Chris Chan Update October 9, 2008) is a video in which Chris issues a statement regarding the revelation that the trolls acting as Blanca have obtained his Sonichu medallion. He admits to having sent Blanca the medallion, but claims she has already returned it and that he has modified it to make it more difficult for trolls to make unofficial copies. However, this "upgraded" medallion, which he is wearing in the video, is unmistakably a completely new model; Chris's apparent panic in the video all but confirms this.

Chris also comments on the leak of his DVD to YouTube, demanding that no one look at the footage since they're not supposed to. He also insists that it's not the "director's cut", which is a case of Chris poorly bluffing, since the contents of the leaked DVD matched the description of the to-be-released product on his website exactly.

The Chronicles of Christian: Christian Sells Out (officially Chris Chan Videos are Sponsered By SCEA) is a 24-second addition to the Captain's Log and introduces the LittleBigPlanet and Guitar Hero videos he will upload for a month known as the The Lost Month.

Y'all know who I am, so my message should be clear. I am here to dispel a couple of rumors that have been floating around.

Firstly, my med—my Sonichu medal was not stolen. It was entrusted to my sweetheart… Blanca, who lives over in, uh, Kentucky. Rest assured: she is not a troll, so nobody say otherwise. I have talked to her on webcam and video—and, uh, audio and heard her voice over micr—over her microphone, to my speakers and headphones. And I also—and I also talked to her brother… and he's a good fella.

Anyway… I sent her—anyway, I sent her the medal, and, uh, even though, uh, s-s-some trolls nearby got ahold of it temporarily, she managed to get it back and sent it back to me express.

So, anyway, with that—uh, while the, uh, images on the back of the medal… were shown… [inhales deeply] I have decided to, uh, paint over those images, and, uh… fix my medal to be more unique—that can definitely be separated from everybody else. [gives close-up view of back of medal] These Shrinky Dink charms - these three charms - cannot be copied. And I'll tell you something else that cannot be copied. I have modified it, with a little peg there… [shows “promise” ring] to hold my high school ring… with my amnyfest stone on it—my amnyfest birthstone.

[removes ring from finger and sets it in medallion] Try copy it now!

So, anyway—anyway, with that—also, the, uh, DVD, th—that was not stolen either. The, uh, Man in the Pickle Suit tricked me once again, by pretending to be a trusted gal-pal of mine. So… it was sent upon re-quest with-- thank God I had the foresight to n-- to not make a copy of my director's cut, which has a lot more footage on it than any distributed copy has.

So, anyway, uh, with that… if you see any Sonichu items or the CWC DVD on it… do not buy them, because they are pirated and false - not authorized. Do not buy. And that goes for, uh, videos—the videos—the footage from the DVD on YouTube. Unless you've already seen them, do not watch them… or watch 'em again… 'cause it'll weigh heavy on your conscience. 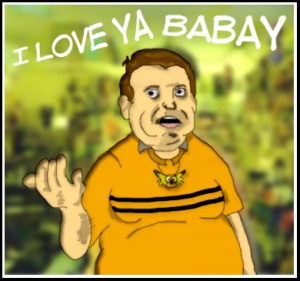 Anyway, before I conclude this update video on this October 9th… I wish to, uh, also proclaim my love for my sweetheart. I love you, Blanca. I cannot bear to live without you, baby. So, please come here as soon as possible, so we can be together forever… my eternal love.

[clutches chest] Mmm… pain me—it would just pain me if you die—if you… got hurt. So, nobody better harm a hair on her, or else you'll hear from me!

And also, the, uh, co—and also the eighteenth episode will be finished soon enough. So… to my Sonichu fan—to my loyal Sonichu fans, thank you for your support.

And have a good day or good night.

Also, this video, as well as- as well as all previous videos, are proudly presented to you thanks to the- gracious... tramper- technology from Sony Computer Entertainment America.

Look forward to the upcoming LittleBigPlanet game, coming to- only on PlayStation 3... And see exclusive levels that I will be uploading after I've created soon enough. That y'all would be very interested in playing.