"An Official Sonichu Update" is an 15 August 2008 video, in which Chris begins to settle into the pattern of using his YouTube account to keep his fanbase updated on his business. He concedes that Encyclopedia Dramatica has successfully raised the funds needed to remain in operation, despite his best efforts, although he does not really admit failure in his campaign.

Chris also denies the reports on /v/ (later added to the ED page) that anon successfully stole his Sonichu medallion. In this video, he employs a clever bluff, claiming to have multiple copies of the medal so that trolls will never know if they are stealing the true, official, original medallion or a decoy. Until the medallion was successfully stolen two months later, many were convinced that Chris indeed had multiple Sonichu medallions. However, as Chris himself revealed in his 8 August 2008 video, the original medallion has special markings on the back for authentication, so no one believed it would be difficult to get the real one.

Chris then spends the bulk of the video inviting his personal army to contact Nintendo and Sega to pressure them to create Sonichu merchandise. 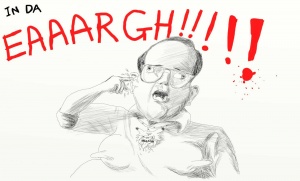 This is an official update to all the loyal Sonichu fans on the Internet and everywhere else.

Well, first off, the—while the Encyclopedia Dramatica page—and the whole website—they, uh, did g—manage to get their ill-gotten money. But I say [holds up middle finger] screw them! [twists middle finger in ear] In the EEEAAARRR! [involuntarily makes a face that suggests that even he is embarrassed at having just done this]

So, anyway, uh… aside from that note, let's get down to our serious measures [pronounced “mez-uh-churs”].

How are you to know? Hmm… that's for your own understanding.

Okay, well, first off… about, uh, 2005, I sent a letter to Nintendo of America telling them about—informing them about my idea. And let me make it, uh, perfectly clear—perfectly clear: parodies are legal to copyright. They c—as long as they do not claim to be the original (or never intend to be) they are spoofs, parodies, and they are (a-foremost) legal. [makes an L shape with one hand]

So, anyway, I sent a letter to Nintendo of America… in April 2005, and they sent me back a re-ply… [holds up the reply] in the big envelope, which I will now read to you a few quotes from, as to, like, uh, how they have… res—felt about the idea.

So… in the fir—so, just give you a few quotes here—so, like, they say, uh:

“We appreciate you taking the time to share your great Sonichu game w—idea with us.”

Yeah… it says here that, uh, yeah… they—th—it goes on to say that:

[obviously paraphrasing slightly] “Nintendo of America has some of the most devoted, enthusiastic fans of any game developer. Each week, they receive, uh, hundreds of thousands of suggestions about their games and systems. While they would love to, uh, use ideas from f—fa—from fans to develop actual products, due to the volume of the, uh, requests they receive and the resources it would take to process them, they do not accept unsolicited game or product ideas. But they are committed to being at the leading edge of game and hardware development, though, and they can be sure that they are constantly at work developing new and exciting products and game ideas.”

Now, uh, here's the interesting part… where they quote about how I can actually… go further about ch—about them changing their minds and actually accepting the idea and helping me, uh, makin’ it—makin’ it totally real… with the video games and the TV animations and the action figures, and… officially-released—my personally-approved… medals. Instead of some… crappy sugar cookie imitations… that, like, you have seen in that picture. Hey, they gave me a free sample of that at the grocery store! It was delicious… that sugar cookie… and this is not a sugar cookie. This? [raps on medal] Hard plastic. Haaarrrd plastic… I tell you what!

But anyway, getting back to the letter, they say that, uh....

[obviously paraphrasing again] “The best way to let other fans know about my idea or to generate hype about the future game I'd like to see is to post the ideas to the forums on their sites.”

Well, I guess I—um, I’ll—like, I have done—uh, done a lot, well, better than that. Hey! The website. The MySpace page. The, uh… group on the MySpace.com. And so many other things… some—a few videos on YouTube about myself. And you know what? Hey, think about this: you help me—you, uh, lis—you take part of this, and you might be able to actually see official releases… of the DVD I put together and about when I turned 25! Hooray.

Alright. So, anyway, getting back to that: what you can do to see all this in fruition and officially-approved distribution. You go to nintendo.com. Aft—if you have an account, or if you don't have an… account, you get yourself signed up for free. Talk about Sonichu. Build up more hype in their forums everywhere. Send them e-mails requestin’ that they bring them to fruit—fruition—they talk to me personally about—about bringin’ them to—bringin’ all that to fruition. Send them the e-mails, handwritten letters to their official building in Seattle, Washington. You get the address off of the back of any Nintendo of America distributed game… software.

Also, you could send, uh, such, uh, letters and e-mails in possible forms—suggestions towards Sega of America. Do one or the other, or I would recommend doing both: sendin’ the cop—sendin’ one to the other and a copy to the oth—to the—one copy to one and a copy to the other. You do that, and I will guarantee… the more likely success of distribution of the official video games I've been dreaming of [jabs fingers into temple] in my head. [sighs] You will definitely see more comic books. You will definitely see… animations… and distributions of official action figures and… approved medals.

So, there: that's all you gotta do. Let Nintendo and Sega know about the hype! Send them your personal requests and everywhere. Tell them to talk to meee! They both—Nintendo of America and Sende—and Sega of America—they know my address and my phone number; they have it in their systems. So, talk to them; have them talk to me. Bring the Sonichu idea to fruition!

And there's the update for now. Thank you for listening.