Kudos to the Encyclopedia DramaDestruction

During Chris's campaign to have his Encyclopedia Dramatica page removed, the site was suffering from frequent outages and slow load times due to traffic exceeding the server's capacity. A fundraiser was held to secure enough donations to improve the site's server. Chris presumed that it was somehow his doing, and commanded his followers to withhold monetary support of the site. To sweeten the deal he provided a sneak preview of the long-awaited Sonichu #7, or Kudos to the Encyclopedia DramaDestruction.

As well as offering early insight into his ego, the decision to take credit for ED's destruction undoubtedly raised Chris's profile, attracting many more trolls to take notice of him and seek vengeance. Additionally, his presentation of the Family Guy/Ghostbusters scene, accompanied by his performance of the Ghostbusters theme, is among the crowning achievements of his lolcow career. Since his artwork is terrible and the pages shown in the video are uncolored and indecipherable, the entire video becomes a surreal testament to Chris's entire bizarre existence. 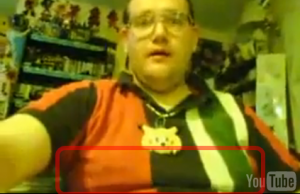 LOOK AT THOSE BOOBS GOD DAMN

Ladies annenlemen on the Internet! To all the Sonichu fans!

I am pleased to announce that, uh, the Encyclopedia Dramatica—not only the web page, but the whole freaking website's goin’ down! …And to make sure it sta—and t—to make sure it definitely goes down and stays down, do not—and I repeat—do not donate any money… to that web pa—to that website... especially if you want to, uh, see the more adventures of Sonichu that I am dra—that I am conjuring up in my mind and drawing up.

And to give y’all a little—real reward for, uh, your help and effort in the, uh, destruction of that heinous slander, I will grant you the—uh, an access preview to an—to a little—to a joke I wrote in the upcoming iss—in the upcoming issue… which I have yet to complete. It opens at, uh, me thinkin’:

“HMM… I FEEL AS SILLY AS THE TIME I TEMPORARY GAINED WEIGHT, BECAME STUPID, AND WENT TO WATCH [G--] TELEVISION AT GHOST COMMAND.”

And, Seth MacFarlane… message for you, creator of Family Guy:

“HERE IS A SILLY SKETCH IDEA THAT YOU MAY USE! YOU HAVE MY FULL PERMISSION TO USE THIS SKETCH.”
[Note: these two sentences are differently worded in the finished comic.]

Now, as I, uh, show you the drawings, note that they are not colored in yet, but I will, uh, read the lines as they are, uh, said. [points camera down at the open comic]

[shows page 9, panel 1, in which the cast of Filmation's Ghostbusters and Sammy are seated away from the viewer, in front of the Skelevision] Okay, so, we got everybody sittin’ at the couch there.

TV-14! Just for this skitch! Just like the Family Guy show. The Skelevision says:

[speaking in a deep voice] “UHH… I GOTTA USE THE BATHROOM… EXCUSE ME!!”

Then, I'm sittin' in the—sittin' right there and I'm sayin':

[speaking in a nasal voice] “UH… I GOTTA USE THE CAN TOO.”

[shows page 9, panel 2, in which Sammy discovers that the Skelevision has taken the only restroom] Then, we see that, uh, I found—I find the door and there's like:

Look at this: “neutral” bathroom for ghosts.

[shows page 9, panel 3, in which Sammy mistakes the Skelevator for another restroom] And I say:

[shows page 9, panel 4, in which Sammy is hidden inside the Skelevator]

“HMM. I WONDER WHAT THESE BUTTONS DO.”

[shows page 10, panels 1-2, in which Sammy is sent down the Skelevator] Whoop! Whoosh!

[shows page 10, panel 3 through page 12, panel 3, in which Sammy lives out the Ghostbusters transformation sequence as Chris sings the theme song (which is essentially just “Let’s go, Ghostbusters! Let’s go, let’s go!” over and over again)]

[shows page 12, panel 4, in which the Ghost Buggy is sleeping at the end of the Skelevator]

[shows page 12, panel 5, in which Sammy lands in the Ghost Buggy with enough force to snap its wheels off]

[shows page 13, in which Sammy apparently shits himself] [makes an explosive shitting noise]

No wheels! That's the joke there!

Oh, and here's a funnier joke! [shows page 14, panel 2, in which Christian and Magi-Chan are interrupted by Sammy from the previous scene] I'm interrupted—my fat guy says:

[shows page 14, panel 3, in which Chris and Sammy appear together]

Fat guy's name: [pans to Sammy] “Sammy”. [pans back and forth between Sammy and Chris] See? We co-exist.

“NO PROBLEM, SAMMY; WE MAY NEED YOU FOR[, UH,] ANOTHER BIT IN THE FUTURE ANYWAY. YOUR MEDAL WAS NOT PAINTED WITH THE VERY SPECIAL UNIQUE SYMBOL AND WRITING ON THE BACK, SO THAT NOBODY WILL MISTAKE IT FOR MY ORIGINAL.”
[Note: this last sentence is differently worded (and twice as long) in the finished comic.]

“[OH,] NEAT! THANKS! HEY, I’LL SEE YA LATER! I GOTTA GO HAVE A BREWSKY!”
[Note: this sentence is differently worded (and says nothing about drinking) in the finished comic.]

And… there you go! Family Ji—J—Guy joke to look forward to in the next episode… which m—which, uh, will get on the Internet soon enough… but mostly—only if that web page goes down, so… keep on not donating it and encouraging everybody else to keep the money in their wallets, as well. You can save that money for the PBS stations… keep the British comedy going.

All right. Y'all take care. Peace out.