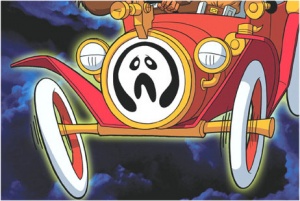 The Pete Best of Ghostbusters.

Thanks to 1975's The Ghost Busters, a forgotten show in their back catalog that only ran for 15 episodes, Filmation Associates (producers of He-Man) struck gold in 1984 when Columbia Pictures released a hit with a movie with the same name. Filmation sued Columbia in 1985 over the use of the title Ghostbusters, and in the ensuing settlement, Columbia agreed that it would not use that name for a cartoon based on their film. Filmation quickly cranked out a low-budget spin-off/sequel of its 1970s live-action show to capitalize on the popularity of the Ghostbusters name. The result was a forgettable cartoon destined to join the vast catalog of cut-rate VHS cartoons that populated bargain bins at local grocers in the early 1990s. In what must have been trollsome intent, the animated spinoff to Columbia's Ghostbusters ended up being named The Real Ghostbusters, but Chris doesn't care about that series.

While eclipsed in popularity by the unrelated movie franchise that began about a decade later, Filmation's Ghostbusters does have its fans, and Chris is among them. When asked what he considers the 5 best television shows that he's ever seen, Chris was frank:

The Ghostbusters live in their Ghost Command headquarters, where they receive missions from a television called Skelevision and take on the power-hungry ghost wizard Prime Evil. When going into action they enter the Skelevator, sending them through an absurd, Rube Goldberg-esque transformation sequence that dresses the Ghostbusters in safari outfits and then deposits them into their transport, the Ghost Buggy. The running gag in this sequence is that the team's leader, Jake Kong Jr., has no difficulty going through the system, while the show's overweight comedy relief, Eddie Spencer Jr., bounces around awkwardly. These reoccurring scenes were a fixture of the show accompanied by the Ghostbuster's main theme. You can see it yourself here. 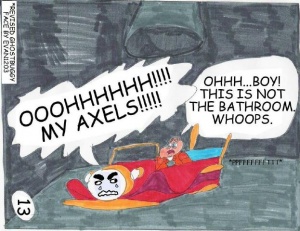 While the average 20-something would have struggled to remember the names of the characters in The Real Ghostbusters, Chris casually worked references to its forgotten namesake into an all-ages comic book. In Sonichu #7, Chris was inspired to drop in a cutaway gag straight from Family Guy. Fat and stupid Cartoon CWC Sammy hangs out at Ghost Command but mistakes the Skelevator for a restroom and enters the transformation sequence with hilarious results. That is, he repeats the Eddie Spencer gag sequence almost exactly, including Sammy's final impact in the Ghost Buggy resulting in the vehicle screaming "OOOHHHHHH!!!! MY AXELS!!!!!" in agony as Sammy is heard shitting himself in the car anyway.

Combined with the irrelevancy of the Ghostbusters animated series, the bizarre non-sequitur nature of the scene utterly baffled readers. Because of this, "OOOH! MY AXELS!" has become a line memed by trolls and observers alike, though not to the extent of "but during the stone age".