Beavis and Butt-head is a classic animated series created by Mike Judge for MTV that aired from 1993 to 1997, right in the middle of Chris's childhood (the series would later on be renewed in October 2011 and again at some point in 2021). Given that the show revolves around two fifteen-year-olds who laugh at pretty much every sexual innuendo they can think of, it's not hard to see why that Chris seems to have been a fan of the show, having plagiarized parodied a scene from the show in Sonichu #7.

The show revolved around the pathetic lives of its unfortunately-named titular characters, a pair of fifteen-year-old lazy idiots. When the boys aren't slacking off and watching TV, they often wander around their small hometown, concocting ridiculous get-rich-quick schemes or trying to lose their virginity. In other words, they would remind one of Chris, only younger, employed, and thin.

Chris and the show

The scene as it originally appeared...

Around the show's first run, Chris was 11-15 years old, so it is very possible that Chris was a fan of the show at the time.

Perhaps Chris was able to identify with two socially backwards, idiotic slobs who enjoyed finding sexual innuendos in everything and sitting on their couch, watching TV. With his simplistic mind, perhaps he found enjoyment in watching these two simple characters being lazy and doing idiotic things. Then again, maybe he just had too much money to spend, heard that the show was funny as shit, bought some DVDs and thought the show was funny, by taking the simplest jokes at face value.

In Correction of EX relationship status, Chris compared The Wallflower to Daria Morgendorffer, who debuted on Beavis and Butt-head before getting a spin-off named Daria, which Chris also liked.[1][2] Although Beavis and Butt-head has an obvious appeal to Chris with its childish and crude façade, why Chris likes Daria is unclear, given that the humour is not at all childish and is mainly based on countercultural idioms and general irony. Chris probably likes it simply because it has likeable female protagonists, and Daria looks a bit like Meg Griffin. 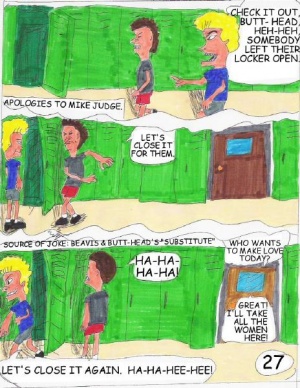 ...and the scene in Sonichu form.

Whatever Chris's reasons for having seen the show were, apparently he thought that a scene from the episode "Substitute"[3] which shows Beavis and Butt-head fucking around with a locker was so funny that he decided to steal parody it in Sonichu #7. Chris recalls Bionic emerging from a locker in his imagination, so this leads him to the "hilarious" idea of having Beavis and Butt-head slam the empty locker shut, just like in their own show.