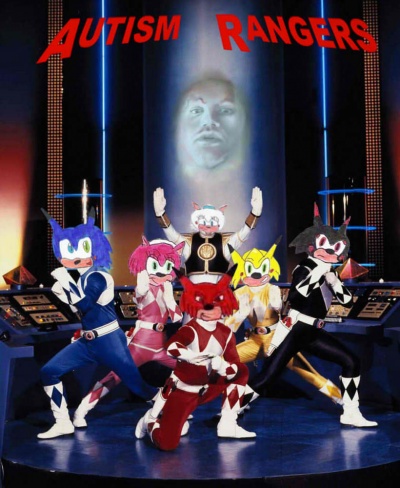 Power Rangers is a multi-decade spanning franchise that adapted the Japanese tokusatsu Super Sentai series for Western viewers. Debuting on Fox Kids, and produced by Saban Entertainment (with the original Sentai shows produced by Toei and Bandai), the show centers around a spandex-sporting team of teenagers armed with sophisticated weaponry, gadgets, and giant machines that combine into even bigger machines, who fight aliens and monsters. It was a smash hit when it first aired in the early 1990's, and while most of the children who enjoyed the original series have long since grown up, new seasons continue to be produced by Hasbro.

And just like everything else, Chris got his grubby little hands on them.

Not much is known about how much Chris enjoyed the Power Rangers franchise, though it is known that Chris prefers the original Mighty Morphin Power Rangers over the newer series...

Ever clouded by nostalgia, Chris is likely either unaware that such a reunion would be impossible due to the tragic deaths of Thuy Trang, the original Yellow Ranger, in 2001 and Jason David Frank, the original Green Ranger, in 2022. It also didn't help that David Yost, who played Billy Cranston (aka the first Blue Ranger) regrets ever being in the series in the first place because of alleged harassment over his sexuality.

Shockingly enough, Chris did get his wish of the original Power Rangers getting back together. Surprisingly in September 30, 2022, David Yost and Walter Jones (who played the first Black Ranger), announced a project for Netflix in which they would produce a special that will celebrate the franchise's 30th anniversary set for release in 2023. It is unknown if Netflix will bring back Austin St. John, who played the original Red Ranger, because of his legal troubles, or Amy Jo Johnson, who played the original Pink Ranger. It is certain that Chris will not be able to view the special, given his recent endeavors...

On The Wall of Originals, two hand-made Trainer cards are devoted to the series. The first is a card devoted to Bulk and Skull, the two dimwitted bullies from the original series who served as effective comic relief.[1] The second is a Sonichu Zord, predating the existence of Son-Chu by at least nine years. It seems that Chris attempted to make this Sonichu Zord like the popular White Tigerzord,[2] but looks less like a transforming machine and more like a whacky villain of the week that would appear in the show. Chris depicts Sonichu's head slapped on its chest, with a dull gray robot head popping up in the first head's place, and its tail being used as a sword.[3] Needless to say, it fails horribly. 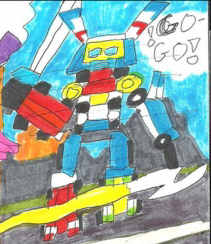 The Kart Megazord - seriously, what the hell?

In the CWCipedia's article on the Private Villa of Corrupted Citizens, it is mentioned that Chris was once a member of a Power Rangers team, despite the fact that all the other teams have been from California or outer space. In fact, he was the team's leader!

It doesn't mention who he fought or what he fought or even what powers he used, but it is said he piloted a go-kart(?) that was "sleek like an Arwing" and was the head of the so-called Kart Megazord. Sadly (for our sake), Chris disbanded the team before his graduation, but soon installed a new, younger team to take the reins.[4]

(As an interesting aside, Chris pretty much ripped off the go-kart vehicles, the "Kart Megazord" and the graduation disbanding and reforming from one of the earlier seasons of the TV show, namely Power Rangers Turbo, the American version of Gekisou Sentai Carranger.)

In Sonichu #9, Allison Amber calls in the Power Rangers to fend off an attack by Slaweel Ryam (or possibly Liquid Chris). The next panel depicts several people rushing off in ridiculous-looking cars. If these are indeed the Power Rangers, they have yet to be seen again.[5] Near the end of the story, the Kart Megazord makes an appearance, with Magi-Chan telling Sonichu and Rosechu that the team, now known as the CWC-Power Rangers, used their Megazord to defeat the giant B-Manajerk and the Merried Seinor Comic. [6]

In Sonichu #10, to drive those inside the 4-cent_garbage.com Tower out, Chris and the Hedgehog Boys play a song entitled "Revive Zordon". This excellent song (which is sung to the tune of Ted Nugent's "Cat Scratch Fever", of all things) features lyrics written by Christian himself. In it, the band laments that the character Zordon was killed off at the very end of Power Rangers in Space, and demands that he be brought back. The song also serves as a rant against "today's c***py Power Rangers".

Interestingly enough, a few of Chris's other creations seem to derive themselves from various Power Ranger-based villains. The design of Samurai Pizza Bots character Excelina seems to be cribbed from Princess Archerina, a minor villain from Power Rangers Zeo. The most surprising is that Silvana's design and origin is directly stolen from Karone/Astronema, a major villain turned hero in Power Rangers in Space who ended up becoming a Ranger herself in Power Rangers Lost Galaxy.