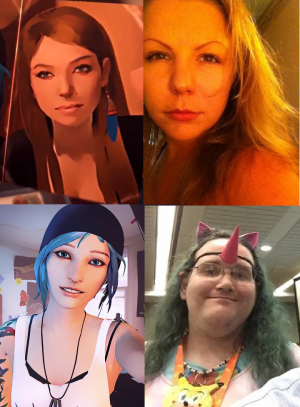 Life Is Strange is an episodic graphic adventure video game that was released for multiple consoles, most specifically the PlayStation 3 and 4. The game's plot focuses on Max Caulfield, a photography student who discovers that she has the ability to rewind time at any moment, leading her every choice to enact the butterfly effect. After having foreseen an approaching storm, Max must take on the responsibility to prevent it from destroying her town. It is followed by a prequel, Life Is Strange: Before the Storm, which focuses on the romantic relationship between Chloe Price and Rachel Amber.

Chris and Life Is Strange

Chris seems to relate mostly to Chloe Price, saying how he wishes that he could be saved by his own Rachel Amber. He may not actually understand the story of the games, since no matter what, their relationship is doomed to fail, and just latched onto the idea that a blue-haired lesbian hooks up with another woman. Or, perhaps he does understand the plot, and has come to realize that there is no possible future in which he has a girlfriend.

On 4 October 2017, Chris brought up the Life Is Strange gameplay when talking about his Adult Chronicles game in a Q&A he did for Kiwi Farms. He said,

Strangely enough, Gone Home is not a choice-making game or at all similar to Life Is Strange; it is a mod of the survival horror game Amnesia: The Dark Descent. The only theme the two games have in common is lesbian romance between two teens.

In 2017, Chris was likely aware of the franchise's sizable following, and the player-determinant lesbian implications of the games. According to Chris' PSN account, he played Life Is Strange on 11 June and completed it.[1] On 4 September, he started episode one of Before the Storm.[2]

On 7 September, Chris posted a status to Facebook, complaining that he was lonely:

Later that day, Chris uploaded a video, scorning the trolls. Again, he used a Life Is Strange analogy to make clear that he was yet to become friends with his contacts: