On 1 May 2009, for reasons that only GodJesus knows, Christian Weston Chandler registered on Wikipedia as ChrisChanSonichu. He did this almost solely to create a user page that is to record one of the most in-depth autobiographical accounts of his life.[1]

A user page is not a proper article, and therefore not subject to the same strict guidelines as an article, but as biographical and personal an article as Chris's was a flagrant violation of Wikipedia policy. The Wikipedia community tends to frown on use of the user pages as web space;[2] the user pages should usually be reserved for purposes somehow related to the Wikipedia project, and user pages for users who don't contribute anything to the articles frequently get deleted. Chris, of course, made it abundantly clear that he's not interested in actually editing the project.

Chris's user page was deleted by a Wikipedia administrator, who believed it to be the work of a troll. Sadly, the details show that this was the real deal.

The only other thing Chris did was add his name to the article on high-functioning autism, under the list of "famous individuals that may have had many different variations of autism along with HFA."[3][4] The kicker is that he put himself right next to Michelangelo. Again.

To date, the "Christian Weston Chandler" article on Wikipedia has been created by trolls four times and deleted each time: 15 February, 26 March, 28 April and 3 May 2009.[5] It has consequently been "salted" or protected so that it cannot be re-created under that title. Chris's account was also blocked indefinitely; even though it was owned by Chris himself, and not a troll (as the admin believed), he violated many rules on it anyway. The page on Ruckersville, Virginia is also locked to non-autoconfirmed users to prevent people from adding mentions of Chris.

To this day, discussions still regularly appear on Wikipedia debating over whether Chris is notable enough to be included on Wikipedia, with users ranging from weens, to fans, to even normal Wikipedians. So far, no such page has been created on English-language Wikipedia. However, Sonichu is briefly mentioned in the history section of the Kiwi Farms page.

In a video on 3 May, Chris makes a case for his worthiness and rallies his True and Honest fans to restore his biography. He also posted the following on his Wikipedia discussion page:

In short, Chris didn't give a shit about contributing to Wikipedia, only aiming to use it as a means to present what he thinks he is without needing to vandalize his Encyclopedia Dramatica page.

The article used Chris's two Nintendo Power appearances, as well as the writeup in the PVCC Forum and the IT TOOK A TALKING BEAR TO GIVE THE NAME A YOUNG BOY LOVES as references. Only a day later, this article was also nominated for deletion; it got deleted less than an hour-and-a-half later after the author requested it be deleted.[6] Further inspection showed that the article creator was a sockpuppet of a user who had previously been banned from Wikipedia.

On 21 April 2016, an article was created under the title Sonichu (Comic) and soon nominated for deletion; the article without the (Comic) qualifier was already protected from creation. It read, as of 22 April 2016: 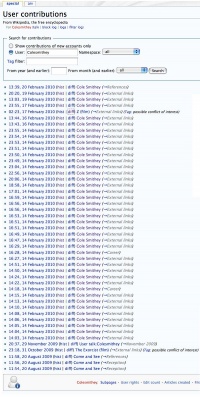 In January and February 2010, Megan Schroeder (or a person pretending to be her) removed references to Chris from the Wikipedia articles on Manchester High School and Cole Smithey.[7] Her edit summaries both ended with "that was either put there by vandals or by Christian under the assumption he is important enough to be mentioned (he is mentally handicapped)." Less than a day later, her edit summaries were struck out.

The articles' histories indicate that both mentions of Chris were added by anonymous users who most likely are not Chris, as the genuine article would have been far more verbose and rambling. One editor cited this very wiki as a reference, running afoul of Wikipedia's policy on reliable sources. As our own Wwwwolf put it, "Sorry, but Chris can't be mentioned here either unless there are reliable sources for this. That means actual publications. Also see Biographies of Living Persons on why sourcing stuff in biographies is such a big deal. This is not CWCki or ED; please remember Wikipedia's rules." Skimming through the talk page and edit history of any article even remotely connected with Chris reveals large amounts of petty vandalism from weens.[note 1] This has led Wikipedia to set their edit filter to prevent users from making edits with Chris related phrases.[note 2]

On 22 February 2010, the article on Cole Smithey was placed up for deletion.[8] The first two votes in the discussion both called for deletion of the article, and both made explicit mention of Chris; the second one read, "Strong delete unless somebody wishes to write a sourced, neutral article about him. Otherwise, this serves as cannon fodder for the ChrisChan Sonichu fanatics over at Encyclopedia Dramatica." The article was deleted on 1 March.

It should also be noted that an account with the name Cole Smithey edited the Wikipedia article on Cole, and spammed film articles with links to his reviews. Whether or not this is the real Cole (who is known to be rather egotistical) remains to be seen.

"Christian Weston Chandler", Christine Chandler" and related titles are currently "salted" (protected from creation) so that pages cannot be created under that title.[9] Pages for places and institutions associated with Chris, such as Ruckersville, Virginia and Manchester High School, are also locked to non-autoconfirmed users, to prevent people from adding mentions of Chris. Lengthy discussions on the talk pages for these articles debating whether Chris is worthy of inclusion have been scrubbed from the site.

The article for Kiwi Farms is an unusual case, since Chris is undeniably of relevance in the history of the site. However, the article ties itself in knots trying to avoid mentioning Chris by name (even though it does mention the CWCki):

Discussions continue to regularly appear on Wikipedia debating over whether Chris is notable enough to be included on Wikipedia, with users ranging from weens, to fans, to even normal Wikipedians.

On 26 January 2017, an article about Chris was added to the Spanish Wikipedia. It is quoted below:

It used the Know Your Meme page about Chris, as well as a site reporting on his 26 December 2014 arrest, as sources. The page was deleted on 3 December 2017, however an archive copy is linked here.[10]

On 15 August 2020, a user of CWCki, Methalowiec, successfully created a page for Chris on the Polish Wikipedia, which is a different website entirely from its English counterpart. Despite the English Wikipedia having banned the page from being created, the Polish page was accepted by an administrator. Notably, the page refers to Chris by male pronouns; this was probably accepted due to Poland's right leaning political environment.

The page was removed[11] on 21st of January 2021. The reasons provided include the fact that the article failed to describe what exactly Chris is noteworthy for[12].

On 19 October 2020, a user of CWCki, AutoDiller (Soglasun on Wikipedia), created a page for Chris on Russian Wikipedia that was mainly translated from the Polish version:[13]

On 9 July 2022, an article on Chris was created on the Dutch Wikipedia under the title "Chris Chan". An archive copy is linked here.