OkCupid, one of the more popular dating websites, matches people based on how they respond to questions that they may answer at their leisure. Unlike sites such as Match.com, OkCupid allows users to message and search each other for free, only charging for perks like ad removal and unlimited inbox space. Like so many other dating websites before, Christian Weston Chandler joined this one with high hopes, and has renewed his profile many times, despite never successfully attracting anybody through it. 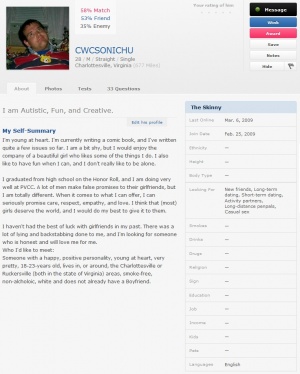 Chris created his first OkCupid profile in late February 2009. He gave up on it quickly, and he never answered any of the questions or quizzes that the site uses to build a personality profile of each user. It's likely he quit using it after girls failed to flood his inbox with offers of True and Honest love. In the usual Chris style, the profile is woefully incomplete, featuring only a very brief personal summary, and a looking-for box in which he checked every available option, including "casual sex".

While mildly entertaining, this profile didn't last long; after a short time it was hacked by trolls. Fortunately, Chris would make more profiles in the future.

OKCupid has a variety of other fields such as religion, height, and race, all of which Chris left blank.

Chris's profile image, recycled from his adventures as direct2sex.

Chris's return to OkCupid started on 4 April 2009 under the name "ChrisCSonichu". This was a much more involved affair than his earlier profile, as Chris updated this profile frequently. These updates slowly changed the page from a badly written but largely benign profile into a violently insane, sex-obsessed manifesto about how awesome Chris is, and how hot girls should be having sex with him. This slow evolution from stupid and relatively innocent to stupid, filthy and deranged can be found in virtually every chronological thing Chris has ever made or done, but is perhaps most evident in his Sonichu comics.

In the subsections below, editor's notes and translations are marked in Italics.

The earliest saved version we have of Chris's page is relatively harmless. Chris makes an ass of himself in two languages, and refers to himself as a creative genius, but on the whole there's nothing too outlandish. Unfortunately, this simple, placid version of the profile was the calm before the storm.

Over the course of several edits, Chris's profile eventually a distinct second form. All references to childish things, such as LittleBigPlanet and Sonichu had been removed, and replaced with things Chris thought of as "manly" like Guitar Hero. The sheer importance that women meet him "in person" became more and more emphasized with every edit, as well as constant references to how much he needs sex as soon as humanly possible. The legendary Third Date is completely foregone in favor of Chris getting precious China on his very first encounter with a woman, and requirements were added demanding that in-person contact must be had no later than two days after the first online contact. Despite his attempts to avoid embarrassing himself with his profile, Chris still misspelled the name of his alma mater, referring to it as "Piedmong Valley Community College". 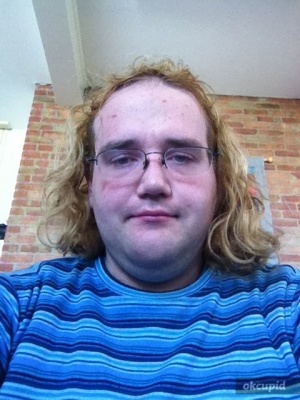 The only interim change between the first and final versions of this page is Chris's most private thing, where he briefly stated in English that he was an autistic virgin.

On or around June 12, Chris revisited his OKCupid entry and updated it briefly. Beyond an extra line, Chris added in a new section to the list. Prior to doing this, he had claimed he was leaving the internet.

As of February 2013, Chris's profile had been updated once again. The final version of this profile featured new references to tomgirlism and a considerable de-emphasis on the importance of quick sex. Particularly notable about this update was the addition of a new photo, showing Chris to have a sickly blue complexion, thinning and receding uncut hair, and worsening obesity. This apparent decline in health is hardly surprising, considering Chris' sedentary lifestyle and gratuitous consumption of McDonald's.

Also of note is Chris' insistence that all potential dates "IGNORE ALL GOOGLE RESULTS", a mantra he has repeated on his Facebook profile and even in personal correspondence, referring people who wish to know more about him to the CWCki while simultaneously instructing them to "IGNORE ALL DEROGATORY CONTENT". Obviously, Chris had failed to realize the paradoxical effect of preemptively instructing people to ignore anything bad they may read about him, only serving to further interest in his autistic antics. Also, in this version of the profile, Chris removes all of the existing Spanish text, perhaps having realized his list of demands to which his heartsweet must conform precludes Hispanic women.

In July 2014, a CWCki Forums member found yet another OkCupid profile that Chris created.[1] A chat with an anonymous friend indicates that it had been set up by a gal pal by 28 June, and that Chris was so shy and incompetent that he depended on other friends to find and screen potential dates. He asked one male acquaintance to actually begin "flirty" conversations with them.

In this iteration of the profile, Chris at first comes off markedly saner than last time, having opted to substitute horrifying Honest Content with embellishments and outright lies about himself, such as claiming he enjoys recreational walking. However, despite the façade of the profile being less terrifying than in previous iterations, Chris's usual brand of aggressive insanity can be found if one scratches the surface.

For instance, in this edition of the profile he makes no mention whatsoever of neither his habit of crossdressing nor his motivation for doing it (hinting at it through his "fashion", as if that were in any way indicative). This, at first, presents a saner picture than before, but a quick foray into the horrifying "Photos" section reveals his tomgirlish ways ad nauseam, something for which his "heterosexual male" profile provides no explanation whatsoever. This makes him look like a complete lunatic.

The profile consists of many other embellishments and lies--Chris claiming that he is good at "anything art related", has a huge imagination, cares deeply for his family, etc. He implies he is the head of his household, claiming to be "looking after" Barb and the pets, the reasoning for which is conspicuously absent. One thing which has carried over from previous profiles is his demand that women verify their identity to him, Chris proclaiming that an "immediate" real-life meeting with him is "Mandetory".

There are other notable omissions - partial and total - besides Chris's tomgirlism. Chris's mentions of Legos is fairly sparse considering that when he wrote the profile he was slavishly addicted to them and spending literal thousands of dollars on sets (although unbeknownst to Chris, a 32-year-old man mentioning Legos at all would be fairly damning). Chris makes no mention whatsoever of his current living situation. As in the fourth version of his previous profile, Chris does not attempt any Spanish in this edition, although he still claims dubiously to be "okay" at it (as well as "fluent" in English). His obligatory list of things his partner must be or have is partially omitted; it is truncated in his main profile in this version, but it can be pieced together in all its glory by perusing the 1,333 personality questions he answered.

OkCupid generates a chart based on a user's answer to personality questions, in order to compare them to other users on the site. Chris was determined to be "more morally conventional", "more spiritual", "more artsy", "more sloppy", "worse mannered", "less sex driven", "less independent", "less compassionate", "less experienced in love", "less arrogant", "less scientific", and "less experienced in life" than the average OkCupid user.

The profile was mostly unused by September, for mysterious reasons. By this time, however, the account had already netted him Catherine, so he wasn't too concerned. 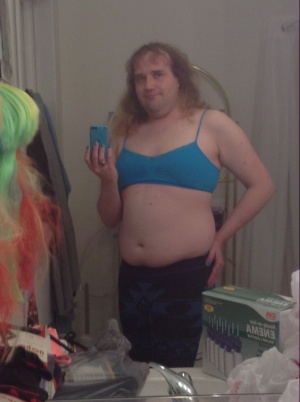 A new photo added to those above. Look at the foreground.

As Chris's "relationship" with Catherine came to an end, he renewed his online Love Quest in December 2014 with a new profile which included changes to reflect his new gender identity. With his name changed to "LevelUpQueen" (which required a fee to OkCupid), he declared himself both a "Lesbian Transwoman" and a "man looking for women". Further muddying the waters, he claimed that he would "work best" for straight, bi, and lesbian women. He stressed he wanted an "open relationship" and was interested in a "menage a trois". He also seemed to have a more open attitude towards friendship; instead of looking for "girls who like guys", he was now looking for "everybody", and he also stated dubiously that he would be interested in meeting married women for "friendship". Other than these new features, the profile was very similar to the LevelUpKing incarnation.